From ‘Butter' (Feat. Megan Thee Stallion) by BTS To ‘Oceana’ By Rashmeet Kaur, here's our pick of the top five songs that released this week. 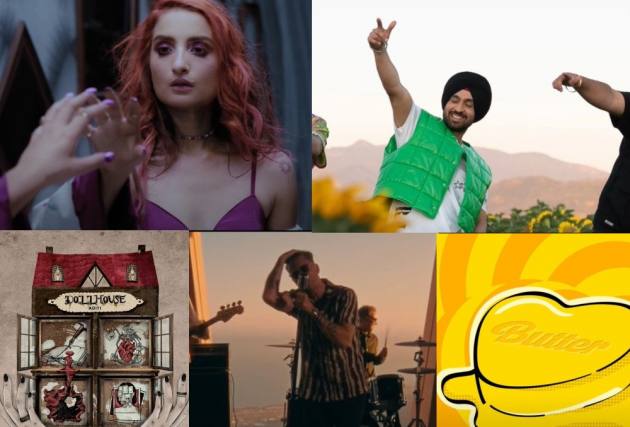 If you have loved the original track by the KPop band, then you will love this, slightly more hip-hop(ish) vibe to the song, thanks to Megan Thee Stallion. Her rap is mean, nasty, aggressive and most importantly so groovy that it seamlessly blends with the chorus of the song. The collaboration just goes on to show how international popstars, with completely different pop sensibilities can come together and create a song that will probably go down as one of the most iconic remixes of the 21st century.

‘Someday’ (Acoustic) By One Republic

While the pop one version is also good, it’s the acoustic version, which probably would resonate more with the listeners, simply because of the arrangement of the song is such that, it just feels nice to hear Ryan Tedder’s voice, with just the acoustic guitars in the background during the verses, and a few keyboard samples added, in between the chorus and the verse. The lyrics of the song will make you think, understand and reflect, and that’s probably another reason why the acoustic version is slightly better than the original.

Rashmeet Kaur and Deep Kalsi’s team has done it again. The coming together of their music sensibilities is a beautiful amalgamation of folk music and electro pop sounds, and the end product is just this beautiful sounding fusion song that will take you into a dream space. ‘Oceana’, is a song, that apart from being an easy-listening track, is also that kind of song, which will be loved by the critics as well. Indian pop, especially the non-film and indie pop space, is on the verge of making an international hit pretty soon, and if anything, ‘Oceana’ is a song that points that these guys are headed in the right direction.

Another track that probably how Diljit Dosanjh is probably one of the very few Punjabi artists who has successfully managed to get that typical Punjabi pop vibe(pun intended) match seamlessly with western pop sounds. ‘Vibe’ also is one such song, and as soon as you start listening to the song, it will immediately take you to those many weddings and parties, where the DJ plays Punjabi music loudly, quite proudly, and everyone are just having a good time. Aptly titled song from that perspective, isn’t it?

‘Your Photograph’ by Aditi Iyer

This indie song will take you into a very introspective space, the lyrics are just so powerful and it has been sung with so much raw energy and passion, that the listener can feel and understand the anger and emotion of the song. Musically it’s in that dream pop space, which will make one think and reflect and probably realise loving themselves is also as important as loving others. Aditi’s voice just beautifully conveys the entire emotion of the song, you can relate to it and the entire song keeps you hooked and it is probably one of those songs you would listening to, over and over again.