From Ed Sheeran’s ‘Visiting Hours’ To ‘Black And White’ By Diljit Dosanjh, here's our pick of the top five songs that released this week. 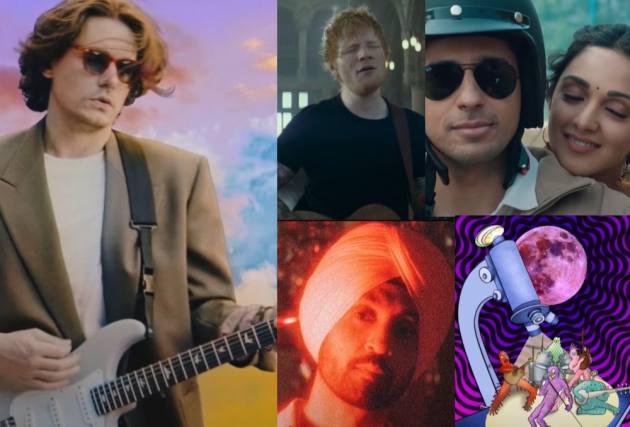 He is arguably the best guitar player of modern times. Mayer’s musical sensibilities where he seamlessly mixes blues with pop is just beautiful and this song is the perfect example of that. Such a dreamy melody to the entire song, he has sung it in a similar fashion as well. Like someone is singing a song when one is dreaming, and oh of course it has got the most beautiful guitar solos and chord progressions. If you are a John Mayer fan already, ‘Wild Blue’ will remind you exactly why you like his music and if not, then it is the perfect song to start listen to his music to.

This Week’s Top Five Songs: ‘Take My Breath Away’ By The Weeknd and Neha Bhasin’s 'Oot Patangi'

Ed Sheeran’s music will always be beautiful and it always puts a smile on your face, even if his songs deal with the theme of heartbreak. ‘Visiting Hours’ is also one such song, and the entire song, even though it deals with a sense of loss and heart break, is just so beautifully composed and obviously so sung really well, that one can always relate to the pain in the song.

‘Black And White’  By Diljit Dosanjh

Diljit Dosanjh’s music reminds one of the typical Punjabi pop music with international sensibilities. 'Black And White' is a typical rnb song, with the lyrics written in Punjabi, and it's just one of those songs, which will awaken the dancer inside you, and not in a very expressive way, but in a slow, smooth kind of way.

Picturised on Sidharth Malhotra and Kiara Advani in the film ‘Shershaah’, the song is the perfect song that perhaps capture the emotion of love and BPraak is perhaps a genius when it comes to composing and singing romantic songs. There’s something about his musical sensibilities that make all his songs very relatable, and even this song is like that. Jasleen Royal's voice perfectly compliments BPraak's voice and conveys the emotion perfectly.

This Delhi based band’s song from their epynomous EP is probably the highlight this week. Dreamy vocals mixed with a lot of elements of funk rock punctuated with sarod solos, is just too unique and will take you into a very different space altogether. Despite the transitions from funk to sarod to the vocals, it doesn’t sound forced at all and the entire song sounds like a beautiful coming together of these three completely different musical sensibilities. This song will not leave your mind for days…