Top Songs To Listen To On Independence Day

From ‘Ae Mere Pyare Watan’ to 'Maa Tujhe Salam’ we take a look at some of the most popular patriotic songs that are definitely on everyone’s playlist every year on August 15. 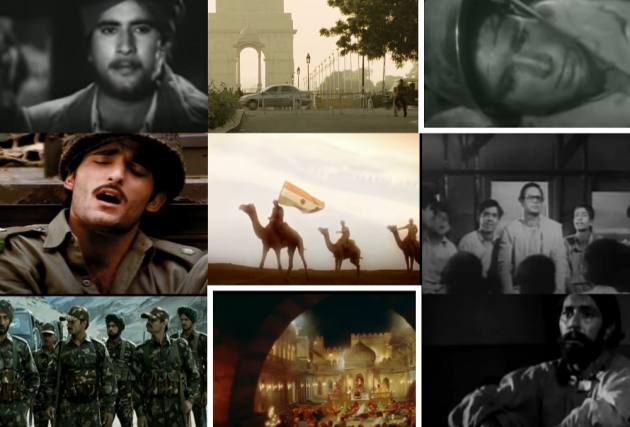 Songs in praise of the motherland, or declaring one’s undying love for India have been written long before India was granted independence by the British. Patriotic songs have always been a big part of the film industry and especially Bollywood. From ‘Aao Bachcho Tumhe Dikhaye’ from the 1954 film ‘Jagriti’ to Ae Watan From the 2019 film ‘Raazi’, Independence Day celebrations aren’t complete in India until one hears a patriotic Hindi number blaring out of speakers. We take a look at some of the most popular patritotic songs that are definitely on everyone’s playlist every year on August 15.

This beautiful  number from the 1954 film ‘Jagriti’ is just the right kind of song to get you in the mood for Independence Day celebrations. Sung by Kavi Pradeep and composed by the legendary composer Hemant Kumar, the song was picturised on actor Abhi Bhattacharya, who uses different techniques to teach kids. One of them is giving history lessons through music. The song since then has become an iconic hit, and is still a common song that’s played today on every function celebrating Independence Day.

This song sung by Manna Day and composed by Salil Chaudhary from the 1961 film, ‘Kabuliwala’ starring Balraj Sahni perhaps is the purest song when it comes to the theme identity and love for the motherland. The fact that the song is about an Afghan traveller stuck in India thinking about his home, yet it is also synonymous with Independence Day celebrations here says a lot about the song’s purity towards one’s undying lying for their motherland.

Ae Watan Ae Watan
This film’s entire album features on almost every patriotic playlist today. However, this song, sung by Mohammed Rafi, gives goosebumps to anyone body who listens to the song to this day. Picturised on actor Manoj Kumar, who plays the role of Bhagat Singh in the film, the song is not about being afraid from sacrificing to lay down their own lives on the quest to attain freedom.

This song from the 1964 film, ‘Haqeeqat’ by Chetan Anand was written by Kaifi Azmi, sung by Mohd. Rafi and composed by Madan Mohan. Perhaps that explains why the song still, not only gives you goosebumps reminding everyone about the countless sacrifices of those, who laid down their lives protecting the freedom of this country, but also at the same times makes you proud about the fact that you are an Indian.

This song by AR Rahman became like the Modern India’s anthem. It was released in 1997, marking India’s 50 years of Independence, and Rahman’s beautiful rock ballad is just the perfect song to be played today. The song gives that feeling of purpose and oneness, and as is the case with every other patriotic song, speaks about one’s undying love for their motherland.

The song composed by Anu Malik, sung by Sonu Nigam and written by Javed Akhtar from the 1998 film, ‘Border’ is also a popular song that features in almost everyone’s playlist on a day such as this. A beautiful patriotic song that stirs up emotions of patriotism and also serves as a potent reminder of the sacrifice made by this country’s soldiers.

The song sung by Sonu Nigam beautifully reminds of their duty towards their countrymen, and reminds them to stay on guard. Picturised on Aamit Khan in the 1998 film Sarfarosh, this song too has become a very popular patriotic song as it celebrates the love one has for their country and also respects the sacfrices made in defending freedom.

This song, composed by Shankar Ehsaan Loy literally pushes you to do something for your country. The composition of the song is beautiful, and almost like a war song, since it comes in the 2001 film Lakshya, when Hrithik Roshan’s unit leaves for the war in Kargil, gives you the right kind of emotions for a day like today.

Another patriotic song, that has become and anthem over the last decade. The title song of the 2007 film starring Shah Rukh Khan was composed by Salim-Sulaiman and sung by Sukhwinder, and has been a common song across playlists on Independence Day and also, for every sporting event, involving India aur Indian players.