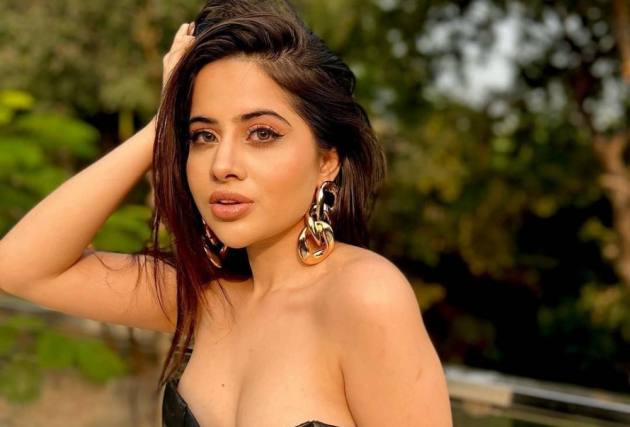 Urfi Javed has been in the news for a variety of reasons since she came into the limelight following Karan Johar's 'Bigg Boss OTT.' The actress, who enjoys experimenting with her outfits, has created yet another look, this time recreating Rihanna's 2018 Met Gala look. Netizens, on the other hand, can't stop commenting and trolling about the outfit's use of silver foil.

She is frequently trolled for making DIY attires out of socks, ripped tees, and garbage bags. Previously, the actress had copied Kendall Jenner and Bella Hadid's outfits.

Javed's most recent video has gone viral, in which she can be seen wearing an off-the-shoulder short dress with a silver foil crown. She wore a custom-made gown with an oversized overcoat and a crown, just like Rihanna did at the 2018 Met Gala.

Urfi Javed's clothing was referred to as "cheap" by social media users shortly after the video went viral. A user wrote, “Why do you promote this and she stop calling her a creator she anything but a creator,” another wrote, “Hey Bhagwan isne to silver foil k usage hi badal diye.. Maayne hi badal diye… RIP silver foil users, (Oh god she even changed the usage of silver foil, RIP silver foil users).” A third user commented, “Swiggy , zomato se khana mngate tb chapati isme lapet kr aati he... (When ordering food from Swiggy and Zomato Chapati comes in this type of packaging).”

She was recently criticised for wearing a revealing dress inspired by Kendal Jenner. Hitting back at the trolls, the actress told Times Of India, “I look hotter than Kendall Jenner in that outfit, so why not? Firstly I didn’t copy her. I wore that black cut-out dress one day after Kendall. How is it possible to get it done in just one day? We seem to have the same choices and they’re great, can I help that?”

Javed also reacted to the backlash. She added, “I will be very honest here. I never gave a f**k (to the backlash). Why would I bother about what some stupid people think? The media has also s**t shamed me with some of them writing ‘maine saari haadein paar kar de ashleelta ki’ and ‘urfi javed ne apna yeh dikhaya, woh dikhaya’. I will dress how I like. Even if my dress pleases the people, they are going to troll me; I just know it. Jab Ananya Panday aur Janhvi Kapoor ko spare nahin karte, toh main kis khet ki mooli hoon?”