Sham Kaushal was seen heartily distributing sweets and thanking fans for all their good wishes. 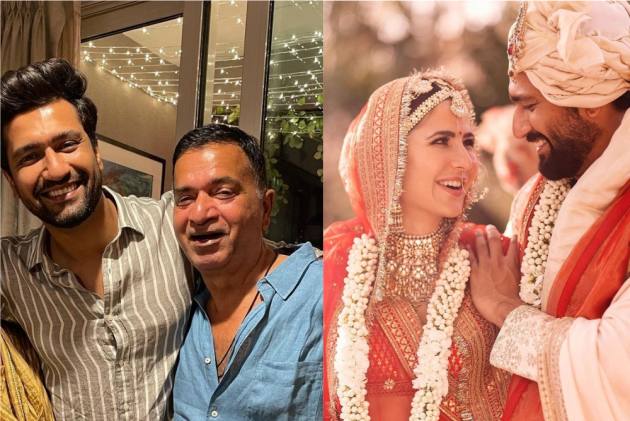 The Internet is still not over the wedding of Bollywood icons Vicky Kaushal and Katrina Kaif. Fans and celebrities are still buzzing with excitement from the celebrations. The grand event was held at Fort Barwara, a historical fort that has been transformed into the Six Senses Resort in Sawai Madhopur, Rajasthan.

Just yesterday, Vicky Kaushal’s brother Sunny Kaushal made a heartfelt post welcoming Katrina Kaif to the family. Sharing a wedding picture, he wrote, “Aaj dil mein ek aur ki jagah ban gayi.. Welcome to the family Parjai ji.” Now, another member of the Kaushal family has come ahead to express his love and gratitude, and it is none other than Vicky Kaushal's father.

According to a report by Pink Villa, in a recent video with the media, Sham Kaushal was seen heartily distributing sweets and thanking fans for all their good wishes. In the interview, he said, “Aap logo ki blessings hai humaare saath,” with folded hands. The delight and gratitude was clearly visible on his face. The video showed a proud father, extending his delight and distributing sweets on the occasion of his son’s marriage.

Kaushal and Kaif made their first appearance as husband and wife on Friday afternoon after they were spotted leaving Jaipur after their exotic wedding. All their family members were also snapped at the Jaipur Airport leaving for Mumbai. According to reports, Kaif and Kaushal are to settle in their new home in the Juhu suburbs in Bombay.

Vicky Kaushal and Katrina Kaif made their first appearance as a couple on Friday evening; they were spotted leaving Jaipur after their wedding. All their relatives were also seen at the Jaipur Airport leaving for Mumbai. As indicated by reports, Kaif and Kaushal are to settle in their new home in the Juhu suburbs in Bombay.