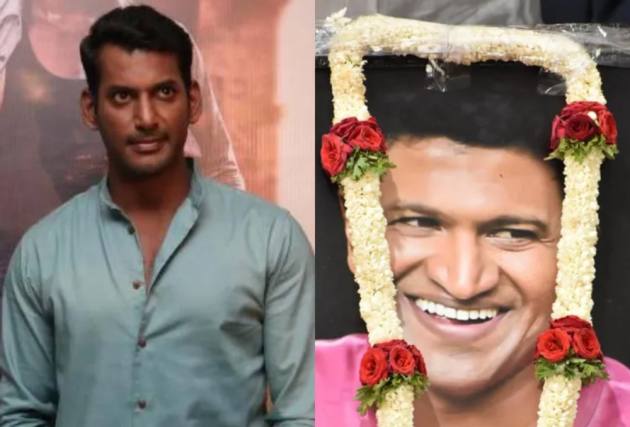 Popular Tamil actor Vishal, during a promotional event for his upcoming film ‘Enemy’, has promised to take care of 1800 students who were getting free education from the late Kannada star, Puneeth Rajkumar.

"Puneeth Rajkumar is not just a good actor, but a good friend as well. I haven’t seen such a down to earth superstar like him. He was doing a lot of social activities and I promise to take care of 1800 students who are getting free education from Puneeth Rajkumar from next year," said Vishal at the event.

He also added saying they were not sure whether to host the event due to Puneeth Rajkumar's demise. Vishal, os one of the many film stars, who took to Twitter and expressed their grief, after son of late actor Dr Rajkumar, Puneeth Rajkumar, died due to a cardiac arrest at the age of 46, on Friday.

He donated generously to charities and foundations. Puneeth had a list of Kannada medium schools that he took the responsibility of, by regularly making donations in terms of fees. Apart from that he also ran 46 orphanages, 19 cow shelters, 16 old age homes. He also donated his eyes and becomes the third member of his family to do so after his father Dr Rajkumar and mother Parvathamma.

The last rites of the Kannada star were performed on Sunday at Sree Kanteerava Studios in Bengaluru. The actor was laid to rest with full state honours. Karnataka CM, actor Yash, and a few other celebs besides family and relatives were present at the last rites.

The final rites were performed as per the traditions of the Ediga community of the Hindu religion.. His mortal remains, wrapped in the national flag, were kept at Kanteerava Stadium yesterday for his fans to pay their last respect.

About 10 lakh fans lined up yesterday to catch a glimpse of their favourite actor for one last time. Many celebs from the Tollywood film industry, including Chiranjeevi, Rana Daggubati, director Prashanth Neel, Prabhudheva, Balakrishna, and others , reached Bengaluru  for the final rites.