Actors Akkineni Nagarjuna and Naga Chaitanya's much-awaited flick 'Bangarraju's trailer has been released. Have a look. 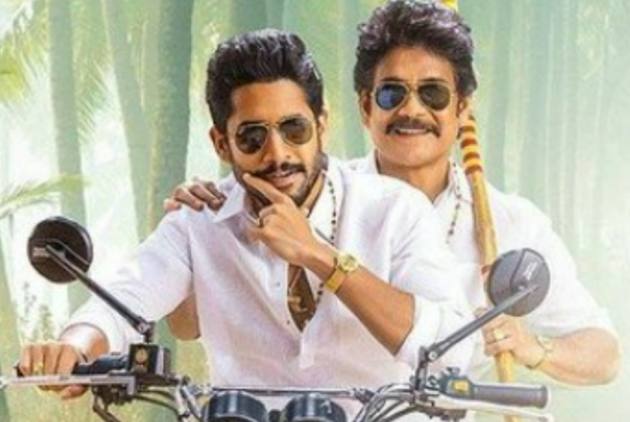 Actors and father-son duo Akkineni Nagarjuna and  Naga Chaitanya gave fans a preview of what is to come with their upcoming film 'Bangarraju'. The theatrical trailer of the film was released on Tuesday (January 11). The movie, which bring the iconic duo back together has been directed by Kalyan Krishna Kurasala.

Here's a glimpse of the same:

The story  for the Telugu film is curated by Kalyan Krishna Kurasala.

Naga Chaitanya took to his Twitter handle to share the trailer and netizens couldn't stop gushing over the flick's trailer.

A twitter user said that Naga Chaitanya looked smart in the trailer and that he cannot wait for the movie's arrival.

Another user said that he is ready to watch the fun filled flick. He wrote,

As the flick's trailer released, fans and well wishers await to experience the movie's theatrical feel. A Twitter user wrote,

All the best anna

A Twitter user expressed his excitement and stated that he has his tickets for the first day first show booked already. He wrote

Nagarjuna and Chaitanya make entry in back-to-back episodes where both seem to  have flirtatous nature. While Akkineni Nagarjuna aka 'Bangarraju'is busy romancing angels of paradise, younger Bangarraju aka Naga Chaitanya flirts with angels in his village.

In the trailer, actress Krithi Shetty' character is introduced as an over-smart village president.

Actor Nagababu appeared as Yama Dharmaraju. The visual effects in the final sections, particularly the flood sequences, are outstanding.

Zee Studios is co-producing the project with Annapurna Studios Pvt Ltd. Nagarjuna is the producer. Anup Rubens curates the lively background score in the film. Satyanand has penned screenplay for the movie. The film has Yuvaraj as the director of photography, Brahma Kadali as the art director and Vamsi-Shekar as the public relations officer.