Anil Kapoor had a blast with world-famous athletes Usain Bolt and Hussein Mo Farah. He shared photos of him partying with them on social media. 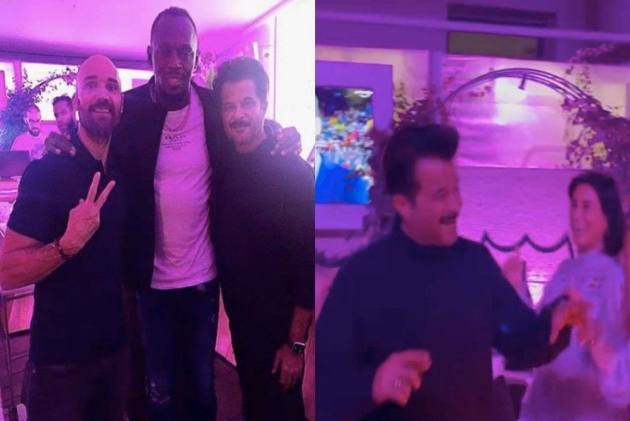 Actor Anil Kapoor is currently having a gala time in Munich and has been sharing snippets of his vacation on his social media. He recently partied with one of the greatest sprinters of all time, Usain Bolt.

Anil took to his Instagram and shared a series of happy photos with the Jamaican sportsperson, Olympic champion Mo Farah and Sports medicine doctor Hans-Wilhelm Muller-Wohlfahrt. Dressed in a black outfit, the actor can be seen laughing and smiling as he posed with the sportsmen for the snaps.

While sharing the pictures, Kapoor captioned the post as, "To a legendary night!@usainbolt @hussein_mofarah #DrHansWilhelmMullerWohlfahrt.”

Bolt, too, took to his Instagram and uploaded a video of the actor dancing, laughing and having the time of his life. “It's A Party here in Munich @anilskapoor @ateamlifestyle #CY," he captioned the post.

Meanwhile, on the film front, Kapoor was last seen in Anurag Kashyap’s ‘AK Vs AK’, which streamed on Netflix. The comedy thriller also featured his daughter and actor Sonam Kapoor. He will be next seen in Raj Mehta’s directorial ‘Jug Jugg Jeeyo' along with Varun Dhawan, Kiara Advani, and Neetu Singh in the lead roles. Besides this, Kapoor will also be starring in Sandeep Reddy Vanga’s ‘Animal’ along with Ranbir Kapoor, Parineeti Chopra and Bobby Deol.