In a video going around on the internet, Benedict Cumberbatch, who plays Doctor Strange in Marvel Cinematic Universe (MCU), can be seen fleeing from his security guards as fans shout in delight. 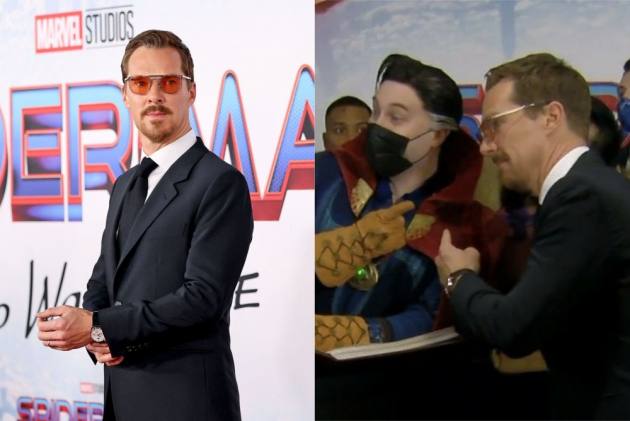 The 'Spider-Man: No Way Home' international premiere in Los Angeles got off to a strong start, due to cast members like Benedict Cumberbatch's upbeat demeanour on the red carpet. The 'Doctor Strange' star was especially joyful after encountering a swarm of Marvel fans eagerly awaiting the arrival of their favourite MCU performers.

'Doctor Strange' fans are buzzing about a video of Cumberbatch from the 'Spider-Man: No Way Home' red carpet. As seen in the video, The 'Sherlock' actor flees from his security guards as fans shout in delight.

Cumberbatch dashed to greet his admirers at the fences, and Tom Holland followed suit when he arrived at Regency Village Theatre. However, because of the overwhelming response from Marvel fans, security has been tightened up to ensure the performers' safety. Nonetheless, Cumberbatch decided to make a break for it.

Benedict Cumberbatch arrived at the #SpiderManNoWayHome premiere. He is being chased by security ðÂÂ¤£ðÂÂ¤£

Did he tried to cast a spell at Red carpet ðÂÂ¤£ðÂÂÂÂ­
pic.twitter.com/GxvRXh9Uqs

The 45-year-old actor also addressed fans in a video, urging them not to 'killjoy' the film by ruining it for others. The actor also stated that, like several other 'Spider-Man: No Way Home' cast members, he had yet to view the film.

Cumberbatch will next be seen in 'Doctor Strange: Multiverse of Madness' with Spider-Man as well as Wanda Maximoff (Elizabeth Olsen) appearing alongside in the multiverse action.

'Spider-Man: No Way Home' follows 'Spider-Man: Far From Home.' The film is directed by Jon Watts and stars Tom Holland as Peter Parker and his superhero alter ego Spider-Man, alongside Zendaya as Parker's girlfriend MJ, Jacob Batalon as Peter Parker's friend Ned, and Benedict Cumberbatch as Dr. Strange. The film is slated to release on December 17 this year.

In 'No Way Home's' trailer, Peter Parker approaches Doctor Strange to undo the damage and make everyone forget the wall crawler’s true identity. However, he remembers later that his loved ones will forget that too, including Zendya’s Michelle Jones. He tries to interfere with the experiment and it goes terribly wrong. The multiverse is wide open and villains from earlier Spider-Man movies are shown, which can also be seen in the film's poster.