Katrina Kaif and Vicky Kaushal got married on Thursday, December 9. The actors took to their official Instagram handle and made a happy announcement, along with photos from the wedding. 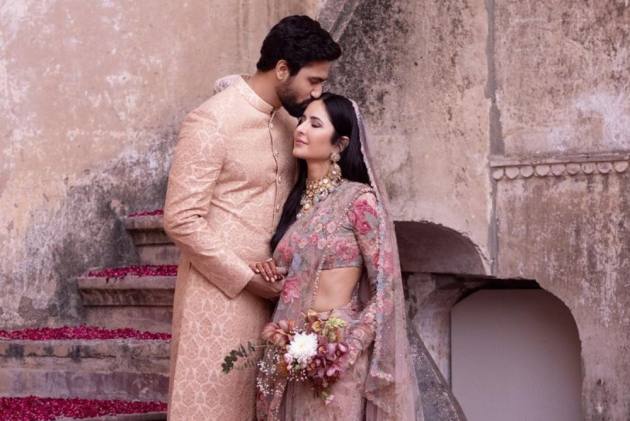 Newlywed actors Katrina Kaif and Vicky Kaushal arrived in Mumbai on Tuesday evening and were greeted warmly by the paparazzi. The duo was spotted outside Vicky Kaushal's Andheri house after apparently returning from their honeymoon.

When invited to appear for the cameras, the pair did so with grins and waving. Kaushal donned a beige top, while Kaif looked stunning in a pink set. During the picture shoot, a paparazzi approached Vicky Kaushal and said, "How's the josh?" Other paparazzi followed, and Kaushal and Kaif merely smiled. It's a popular line from Vicky's 2019 blockbuster flick Uri: The Surgical Strike for the uninformed. Meanwhile, a paparazzi called Katrina Kaif "bhabhiji."

Katrina Kaif and Vicky Kaushal got married on Thursday, December 9. The actors took to their official Instagram handle and made a happy announcement, along with photos from the wedding. Both Kaif and Kaushal wrote in the caption, “Only love and gratitude in our hearts for everything that brought us to this moment. Seeking all your love and blessings as we begin this new journey together.”

In terms of work, Katrina Kaif will next be seen in 'Tiger 3' with co-star Salman Khan. She was last seen in Rohit Shetty's cop drama 'Sooryavanshi,' alongside Akshay Kumar. She will also star in 'Phone Bhoot' with Siddhant Chaturvedi and Ishaan Khatter. The actress will also feature in 'Jee Le Zaraa' with Priyanka Chopra and Alia Bhatt. The film will be directed by Farhan Akhtar and it will be written by Zoya Akhtar and Reema Kagti.

Vicky Kaushal was last seen in 'Sardar Udham,' which opened to stellar reviews. The National Award-winning actor will next be seen in 'Field Marshal' Sam Manekshaw's biopic. The actor has also signed another film with 'Uri' director Aditya Dhar, in which he will also be seen playing the role of the Mahabharata character Ashwatthama. The actor has starred in hit films like 'Uri: The Surgical Strike,' 'Sanju,' and 'Lust Stories,' to name a few.