In an interview, Chopra spoke about witnessing Hollywood star's niceness, after having a difficult day while shooting for the film since she had gotten back on a set after six months of lockdown. 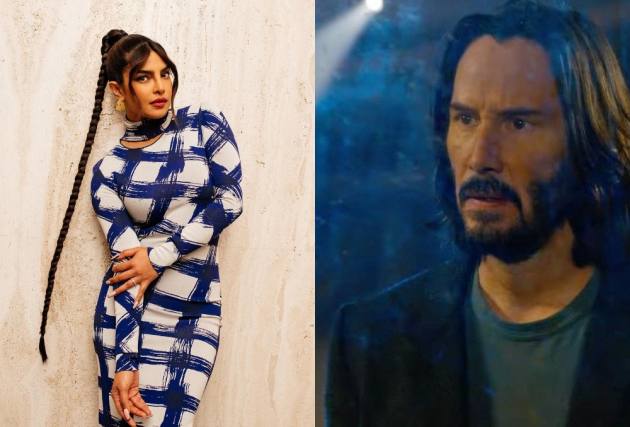 Actress Priyanka Chopra, in a recent interview opened up about how Hollywood star Keanu Reeves, encouraged her after she had a “difficult day” while filming the upcoming installation in ‘The Matrix’ film franchise, ‘The Matrix: Resurrections’.

It's not unknown that Keanu Reeves is considered to be "Hollywood's nicest guy" and when asked if Priyanka had experienced his modesty and generosity firsthand during filming, the actress recalled a story from the shoot as she praised her co-star. Chopra opened up about having a difficult day while shooting for the film since she had gotten back on a set after six months of lockdown.

The 39-year-old actress revealed that she had a lot of words to speak on the filming day and was also very "intimated" but it was Reeves' kind gesture that truly touched her as she said, "He came up to me and he said, ‘that was a very difficult day and a lot to do, you did such a great job and you should know that," she recalled in the interview.

Lauding Reeves for his gesture, Chopra also spoke about him adding that he can read the room and how his kindness meant a lot to her considering she is a new addition to the 'Matrix' universe.

"When you have a day and you just need someone to tell you that, 'you were alright, you did it and you were good'. I think he was very astute, he can read the room well and that meant a lot to me, especially as a new kid on the block in the movie," she added.

It was recently confirmed that she will be essaying the role of Sati in it.

Along with Keanu Reeves as Neo, the film will also have Carrie-Anne Moss returning as Trinity. The film also stars Yahya Abdul-Mateen II as Morpheus, Jessica Henwick as Bugs and also Neil Patrick Harris. 'The Matrix Resurrections' is all set to release in theatres and on HBO Max on December 22.