Where To Watch 'Harry Potter' Reunion In India? Here's All You Need To Know About The Special

'Harry Potter 20th Anniversary: Return to Hogwarts,' will be released worldwide on January 1. 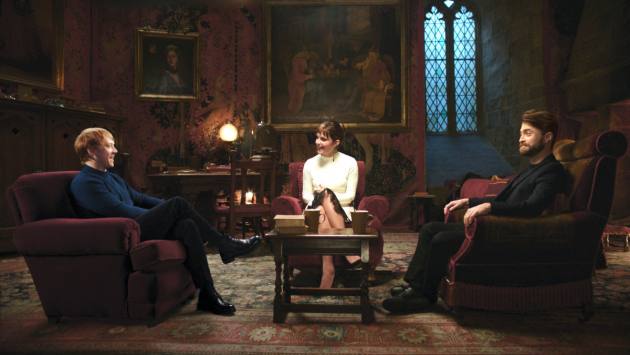 The trailer for 'Harry Potter and the 20th Anniversary: Return to Hogwarts' has arrived. The official 90-second trailer for the upcoming 'Harry Potter' reunion special was released by HBO Max on Monday.

The reunion special was created by HBO Max and Warner Bros. to celebrate the 20th anniversary of 'Harry Potter And The Sorcerer's Stone,' the franchise's first film. Emma Watson, Daniel Radcliff, and Rupert Grint are shown in the teaser reminiscing about their time on the 'Harry Potter' sets.

The retrospective special will tell an exquisite making-of story through all-new in-depth interviews and cast conversations, inviting fans on a magical first-person journey through one of the most beloved film franchises of all time. The highly anticipated retrospective will premiere on HBO Max at 12 a.m. on New Year's Day, January 1, and will be a highlight of the holiday season.

As per Warner Bros. official announcement, 'Harry Potter 20th Anniversary: Return to Hogwarts,' "will honor the magic behind the making of the films and the beautiful family created at Warner Bros. Studios London two decades ago." It will also honor the legacy of the 'Harry Potter' film franchise, and its influence on families and fans around the world.

The trailer opens by taking us back in time to the muggle and wizarding worlds' railway station, where we see Emma Watson, alias Hermione Granger, as an adult. “Think of that powerful memory. Make it the happiest one you can remember,” Radcliffe says in voiceover at the start of the trailer.

In the first trailer for the Return to Hogwarts reunion special, stars Radcliffe, Watson, and Grint tearfully reconnect with fellow 'Harry Potter' co-stars.

“When things get really dark and times are really hard, there’s something about Harry Potter that makes life richer,” says Emma Watson in the trailer. Radcliffe and Grint, who played Harry Potter and Ron Weasley, will reunite with Watson, who played Hermione Granger in all eight films.

Other moments from the trailer include Bonham Carter recalling to Radcliffe that her favorite scene from the franchise was in 'Harry Potter and the Deathly Hallows: Part 2,' when she "had to pretend to be Hermione pretending to be Belletrix" as they break into Gringotts.

Additionally, Ralph Fiennes admits that it was his sister and her Harry Potter-aged children who persuaded him to play Voldemort.

Amazon Prime Video on Tuesday announced that the Harry Potter reunion special, 'Harry Potter 20th Anniversary: Return to Hogwarts,' will stream exclusively on its OTT platform from 2:30 pm on January 1.

The Twitter handle of Amazon Prime Video shared a poster of the special featuring the main cast. The caption of the poster read, “A moment 20 years in the making. Harry Potter 20th Anniversary: #ReturnToHogwarts watch on Jan 1 with us!”

A moment 20 years in the making. Harry Potter 20th Anniversary: #ReturnToHogwarts watch on Jan 1 with us! pic.twitter.com/QRrQ05Unr5

Social Media has also been buzzing since the release of the trailer, Potterheads took to their twitter handles to express their joy.

The majority of responses show fans "sobbing" nostalgic tears of pleasure at the sight of so many great performers returning to a world that many people still hold dear. An entire generation of children grew up with Harry Potter, and the prospect of a reunion special had them ecstatic.

Take a look at Instagram posts going around on social media:

they deserve to be at the harry potter reunion :( pic.twitter.com/H7oFbzza9s

Some fans, on the other hand, were too preoccupied with J.K. Rowling's absence to be moved by trailer. They criticized the absence of "the creator of this world," blaming "wokeism" for her more uncommon appearance at such gatherings.

The WOMAN @jk_rowling that made this possible isn't invited. Because wokeism.

Where is the creator of this world?
Not inviting @jk_rowling is like gathering for Christmas and not invite Jesus!