Year-Ender 2021: Celebrity Break-Ups That Shook Up Everyone

Every year we have quite a few celebrities who end up breaking up for some reason or the other. As 2021 comes to a close, here’s taking a look at some couples who broke up this year. 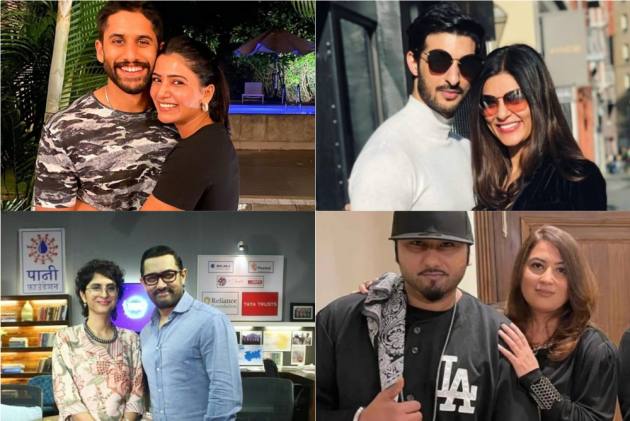 The year 2021 has been a unique one, with many couples reuniting and many others splitting up. Some of the most loved celebrities have split up and opened up about their break-up either on social media or in public forums. As we come to a close this year, here’s taking a glance at some of the celebrity couples in India who announced their separation in 2021.

For quite a long time, rumours about actress Sushmita Sen and her boyfriend Rohman Shawl's separation circulated in the press. However, none of them had previously verified this. However, Sen recently posted a photo of herself with Shawl on her Instagram account and announced that the relationship was over long ago, but they were still thick as friends.

Actor Aamir Khan and filmmaker Kiran Rao, two of the most prominent Bollywood superstars, had announced their separation in a joint statement in July 2021. They opened up about ending their 15-year marriage and moving their separate ways. However, they would be bringing up their son, Azaad, together, will always be linked as co-parents, and will always remain close friends and family for each other. In the years that have passed, we had witnessed the two of them having fun, sharing joy, laughing, and coming together during the year filled with togetherness. That's what made their split news so tough for fans to accept.

Samantha Ruth Prabhu, a prominent South actress, divorced her actor-husband Naga Chaitanya in October 2021, following a flurry of rumours. The couple married in 2017 and always looked gorgeous together, but it appears that their narrative was not as perfect as it appeared and thus ended. The couple met for the first time on the sets of ‘Yeh Maaya Chesave’ back in 2010. Since then, they had worked on quite a number of projects together.

Actress Kirti Kulhari confirmed her divorce from her husband, actor Saahil Sehgal, in April of this year. Kirti Kulhari shared a brief statement in which she stated their separation was a mutual choice and assured everyone that she is in a "fine place" right now. She conceded that the decision was not "simple," but "it is what it is."

The television show's actors, Nisha Rawal, and Karan Mehra have been married since 2012. However, it was recently revealed that the marriage was not joyful when they announced their desire to separate, earlier this year. There were lots of reports coming out from both parties, and some of them were even mud-slinging at each other.

Shalini Singh, the wife of singer and rapper Yo Yo Honey Singh, accused him of domestic abuse and adultery, leading to their divorce in August of this year. Shalini Singh brought allegations of domestic violence as well as claims about his involvement in multiple extramarital affairs after their wedding. The duo was childhood sweethearts, and Honey Singh had tied the knot with his ladylove on January 23, 2011. The duo had completed ten years of marital bliss in 2021.