Year-Ender 2021: Indian Actors Who Made Us Proud In Hollywood

From actress Priyanka Chopra to actor Rajkummar Rao to actress Huma Qureshi, 2021 saw many Indian actors go westwards. Here’s a list of actors who earned the ticket to Hollywood in this year gone by. 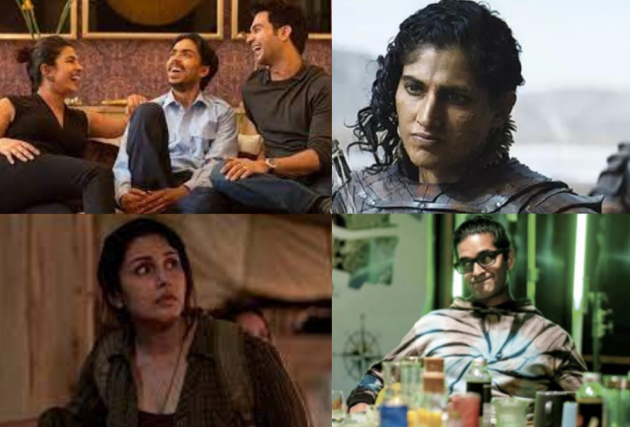 While Indian actors have appeared in major Hollywood films and television shows for decades, the year 2021 can be considered a watershed moment for Indian representation in major western entertainment. Indian actors were seen in everything this year. From blockbuster franchises like 'The Matrix' and the Marvel Cinematic Universe to award-winning films like 'The White Tiger' and big-budget sci-fi epics like 'Foundation.'

As the year comes to a close, here's taking a look at the Indian actors and actresses who made an impression in international films and television shows in 2021:

Actress Priyanka Chopra is no stranger to the entertainment industry. She has been in a number of western projects since her program 'Quantico' debuted. However, the actresses' biggest feature to date, 'The Matrix Resurrections', was released in 2021. Sati, a character seen as a kid in the first trilogy, was portrayed by Chopra as an adult. Even as some sections of the media chastised her for taking a 'small part,' Chopra defended it by saying that she always prefers to pick up characters, even when she chose her films in Bollywood.

Huma Qureshi ('Army Of The Dead')

'Army of the Dead', filmmaker Zack Snyder's zombie heist flick, was one of the year's most anticipated releases of the year. Actress Huma Qureshi appeared among an ensemble cast that included actors like Dave Bautista, Elia Purnell, and Matthias Schweighöfer. Qureshi portrayed Geeta, a supporting character who was crucial to the narrative of the film. Qureshi was lauded by director Zack Snyder. He even said that Qureshi was a terrific actress and he would love to work with her again.

Actress Nitu Chandra Srivastava made her Hollywood debut in 2021, 16 years after making her Bollywood debut and having worked in dozens of films in several languages. The actor appeared in the direct-to-home film 'Never Back Down: Revolt' as Jaya, a woman abducted and forced to fight in an underground fighting club in order to survive. Srivastava disclosed that the character was designed expressly for her when the film's producer learnt of her karate background.

After spending over 10 years in Bollywood, actor Rajkummar Rao finally made his first Hollywood outing. In the Netflix film, ‘The White Tiger’, Rao played a small but very significant character in the ensemble. Even though his role was small in the film, it was impactful and helped Rao get noticed by the international audiences and earned him great reviews.

While actors Lee Pace and Jared Harris were the biggest names on Apple TV's sci-fi epic 'Foundation', actress Kubbra Sait more than held her own. And it wasn't one of those blink-and-miss roles that Indian performers are frequently relegated to in Western productions. Sait portrayed the season's primary adversary, Phara. Sait had even said that she was lucky that she was able to be a part of such a huge show which went on to be etched in history.

Despite having previously worked in films such as 'My Name Is Khan' and 'Mom', as well as the web series 'Hostel Daze', actor Adarsh Gourav's breakthrough came with 'The White Tiger'. In filmmaker Ramin Bahrani's film, Gourav played the lead role. Despite the fact that the film also starred actor Rajkummar Rao and actress Priyanka Chopra, Gourav stole the show. His powerful performance was praised by both fans and critics, and he was nominated for a BAFTA for Best Actor in a Leading Role.

Actor Purab Kohli was another Indian actor who appeared in the newest 'Matrix' film. Kohli appeared in the Hollywood blockbuster as a game developer with actor Keanu Reeves. Kohli had said that he never believed that he could be a part of the 'Matrix' franchise. In an interview, the actor said that he didn't even have to audition for his role because he had previously worked with director Lana Wachowski on 'Sense8'.

Actor Pravesh Rana was the other Indian face in 'Foundation'. Rowan, a lieutenant loyal to Kubbra Sait's Phara, was played by the actor. Rowan, his character, is expected to feature in 'Foundation's second season as well. Rana, who was best known for his appearances on 'Bigg Boss' and as the presenter of 'Emotional Atyachar', had a renaissance year in 2021. He also had a tiny role in the Netflix series 'Serpent', which was based on Charles Sobhraj.

In the midst of a superb ensemble that included actress Angelina Jolie, actress Salma Hayek, actor Kit Harrington, actor Richard Madden, and others, Indian actor Harish Patel accomplished enough to stand out in Marvel's 'Eternals'. Patel portrayed Karun, the assistant to actor Kumail Nanjiani's Kingo. Kingo is an Eternal (a species of eternal super-powered people) who moonlights as a Bollywood celebrity in the film. Before the film's release, Patel had said that he didn't know or recognise the majority of the actors during his audition. It was lovely to see him onscreen after a really long time.