From Ritviz’ ‘Khamoshiyan’ to ‘Roz Roz’ by The Yellow Diary and Shilpa Rao, here is our list of top 10 indie songs released this year. 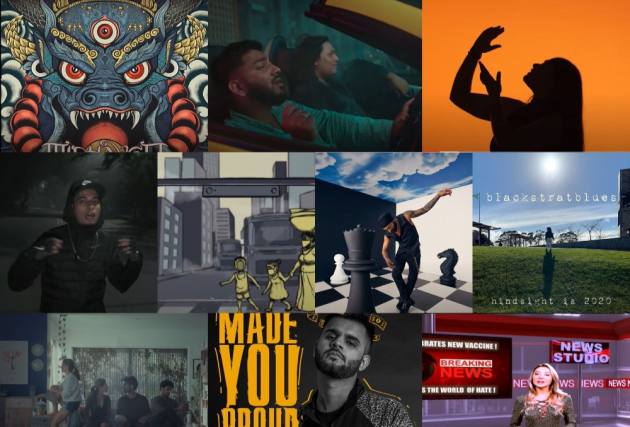 Over the last few years, the independent music scene has grown exponentially. Especially since 2020, due to the ongoing coronavirus pandemic, since film music releases were too few and far between, listener habits changed, which pushed independent musicians from the fringes of popularity to become so of the most heard musicians. Here’s our list of top 10 indie songs from different genres, this year.

There is this brilliant metal trio from Mumbai, Midhaven and they have recently released their concept album, Of the Lotus and Thunderbolt. if you are a lover of metal music and especially Indian metal music, it's right up there, in terms of production value and the entire musical arrangement is just so metal, like old school metal, head-crushing drums and heavily distorted guitar riffs, and of course all the face-melting solos. Three minutes of pure unadulterated metal music. By the way, check out their entire album. It is something else!

Karma’s music is hard-hitting, aggressive, and very real, which will not only make one enjoy the song but also think. The language isn’t sanitised much, but that doesn’t mean it’s been done deliberately. In a lot of ways, it reflects that sort of journey Karma has had, on his way to becoming a popular rapper. Ikka’s rap verses, adds that edge to the song, which is meant to cut across class and social structures, and just being fearless in speaking their minds.

A brilliant upbeat track, that will take you into this completely different world of fantasy. In his typical style, there is a strong bass groove to the song, and lyrics, so simple, that you can almost sing it, and the entire song is arranged at such a beautiful pace that you can dance along with it, drive to it, and of course just listen to it all by yourself.

A brilliant glam rock song, that will take you to the world of 80s glam rock. You know the likes of Van Halen, Bon Jovi, etc. Proper glam rock number, and the song has been sung so well, and the guitar solos are to die for! And best part the song has such fun lyrics that you will find yourself jumping along and singing along to the lyrics.

A soul-stirring number from this Delhi-based rapper’s album which released this year, the song is about taking charge of one’s life. Heavily dominated by synthizers and synth samples, it’s a brilliant, hip-hop song, typical to what rap songs in India are known for.

‘Hold On Tight (Up We Go)’ by Blackstrat Blues (Warren Mendosa)

Warren Mendosa is one of the most famous guitarists from India and his music is a reflection of how Indian blues/rock is this world of Indian sensibilities dominated heavily by Western influences. ‘Hold On Tight (Up We Go)” is that one song from his album that perhaps caps it all, from his beautiful arrangments to solos and guitar chord progressions, there is a reason why he is regarded as one of the finest guitarists in the country, right now!

A super cool rap song, it starts off with a sweet guitar kind of solo, and maybe 10 seconds into it, you have Altaf rapping, spitting bars at breakneck speed. The song will make you think, make you sway, and make you appreciate this really vibrant and constantly evolving Indian rap scene, and we have now an entire group of rappers, from different parts of the country, fearlessly releasing music, speaking about things that they want to talk about, and people are not just listening to them but loving it as well. And 'soch' is one of those songs!

‘Roz Roz’ by The Yellow Diary and Shilpa Rao

A dreamy romantic song, that you probably you need right now. The way it starts, you just are transported into a completely different world, and Shilpa’s voice so beautifully mixes with Yellow Diary's brilliant pop sensibilities and this single probably shows how Indian commercial music Indie music and classical music can come together to make a quintessential pop song, which will just take you in another world.

Varun Rajput is the basic creative force behind it. The song also features a kickass face-melting solo by former Megadeth guitarist Marty Friedman and you will know when it begins… Just listen to the song.

Vasundhra Vee’s vocal prowess, is quite evident in her recent release ‘Run’, much like her musical sensibilities. The song is hauntingly beautiful and has a very bitter-sweet emotional feeling to it, which pushes the listener to a breakthrough, and the overall feeling after listening to the song is that of freedom. Vasundhara nails the highs and lows in the song, and just beautifully conveys the idea of one’s constant struggle while searching for happiness.