If not for the digital platform like YouTube, Bundeli folk songs would have stuck to the region: Satish Yadav 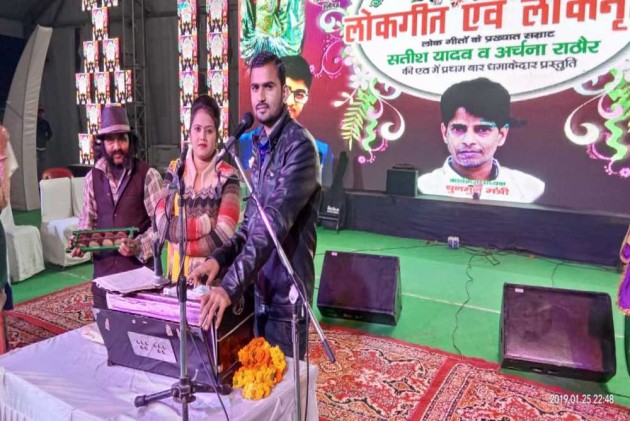 There is a very popular saying in India that beautifully captures the diversity of linguistic culture of the country --- ‘Kos Kos Par Badle Paani, Chaar Kos Par Badi’ (The taste of water changes with every km in the country and language changes with every 4km). The census of 2001 states that 1,599 languages or dialects are spoken in India. Each of these dialects points to a distinctive culture practiced by people sharing geography and history.

The most celebrated and innate part of every linguistic culture is folksongs. Folksongs often originate among people of specific regions who pass it down to generations through oral tradition. Simple and stanzaic in nature, these sings include narrative verses. These songs are sung during festivals and rites of passage like marriage, the birth of a child, death.

One such linguistic culture practised in central India is Bundeli. The dialect is spoken by the people of Bundelkhand, a region with hilly terrain, plateaus and rivers like Betwa and Ken. The region has a celebrated tradition of singing folksongs and dancing on various regional festivals, in praise of nature's beauty and during family functions like marriages and birth.

Manvi Gupta of Outlook speaks to Satish Yadav, who is a Bundeli folk singer. Excerpts:

How did you get into Bundeli folk music?

As a child, I loved singing and my family members thought I was good at it. So when Pandit Shri Deshraj Ji Pateriya came to our village for a function, I was asked to sing my favorite song in front of him. Pateriya Ji was a pioneer of Bundeli folk music who had thousands of students. He passed away two months ago. When he heard me singing, he asked me to accompany him to Sagar (a city in Madhya Pradesh) and learn Bundeli folk music under him. My family sent me off with him and there I learned Bundeli folk music for 13 years.

What is Bundeli folk music?

Well, surrounded by rivers like Ken, Betwa, and Sindh, Bundelkhand is a culturally rich area in central India. People here since the old days have been connected with their land, rivers, gods, farms, and forests. Singing has been part of their daily routine. Farmers sing Faag songs when they harvest their crops. During the season of Kartik (Hindi calendar month), women of Bundelkhand fast for a month and go to a nearby pond or river every morning to take a dip and sing ‘Kartik’ songs in praise of Lord Krishna. Women in the household sing ‘Sohar’ songs when a child born.

What are then different kinds of Bundeli folk songs?

As I mentioned, singing has always been part of the everyday life of the people of Bundelkhand. Songs here mainly celebrate regional festivals, marriages, narrates the story of bravehearts of the soil, famous folklores. For example, ‘Alha’ songs are mainly recital of heroic deeds of our warrior Alha who fought bravely against Prithviraj Chauhan in the battle of Mahoba. Farmers sing Alha during monsoon to entertain themselves. ‘Dadre and Gari’ are very popularly sung in the region during weddings, to celebrate the romance between a new bride and groom. ‘Dadre’ is often sung by a group of women upon the arrival of a new bride in the house.

There are also ‘Lamtera’ songs that farmers sing to express their gratitude to God after looking at their Rabi season crop flourishing and blossoming. The ‘Raai-Kaharwa’ songs are always sung by the drummer who follows the steps of the Raai dancer. ‘Raai’ is a folk dance of the region.

Bundeli folk music is based on oral tradition and is often been limited to local people of the region but there have been artistes like Pandit Deshraj Ji who tried introducing Bundeli folk art to other parts of the country. Despite the efforts of all Bundeli folk artistes, the reach has always been limited. The music, however popular in Bundelkhand, has often found little to no space outside Bundelkhand. In old times, Doordarshan channels, even the regional ones, never invited Bundeli artistes to perform. At present, there are channels for almost all popular dialects of the country, including Bhojpuri, Punjabi, Kannada, Tamil, Bangla, and Marathi, but none for Bundeli.

The government itself has done little to preserve Bundeli folk art. We as a group of Bundeli artists wrote to chief ministers of Madhya Pradesh and Uttar Pradesh several times to provide us with resources, build good studios in the region so we could record our songs but the response from their side has always been dull.

What’s your opinion on the new dawn of digital media?

At present, the arrival of advanced technologies and digital platforms has allowed us to increase our reach. Two-three years ago only I learned about YouTube and was fascinated by the idea of how anyone can upload their content on the platform. So I hired the camera person and recorded all my performances. Later I uploaded them one by one on YouTube. To my amazement, I started gaining views also. One of my videos even received 14 million views which was phenomenal. Soon I started getting calls from people outside Bundelkhand also to perform in their functions and events. Soon I started earning money from Youtube. The platform allowed me to become an independent artiste and gave me a platform to express my talent and further increased the reach of my music.

Once at Rashtriya Ramayana Mela organised in Chitrakoot, I was allowed to share the stage and sing with Morari Bapu, who is a spiritual leader and famous for beautifully narrating Ramayana. That was huge for me as an artiste. Another time at Bundelkhand Mahotsav in Nogaon (a city in Madhya Pradesh) I got the opportunity to present with Raja Bundela Ji. I count that also as a proud achievement of my life.