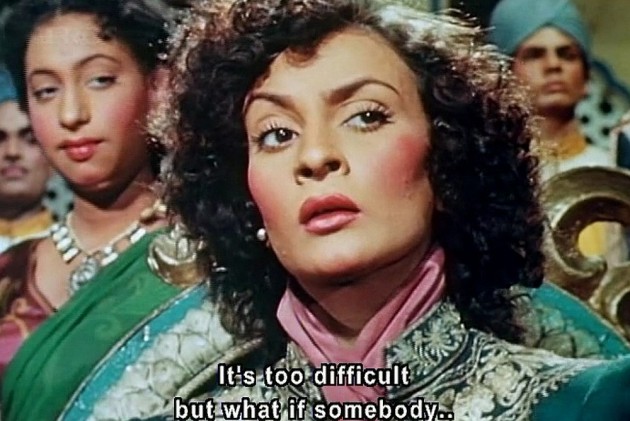 In Shree 420, Ranbir Raj (Raj Kapoor) finds his life changed as he idly toys with a pack of playing cards. As he waits to deliver a gentleman's laundry, he spies the cards and settles in, cheerfully shuffling and dealing a series of perfectly controlled teen patti hands — three queens, three kings, three aces.

And then, in slithers Maya. 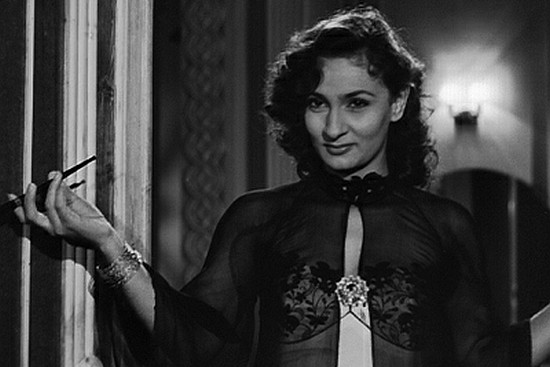 It is hard to forget Nadira in that sheer negligee, cradling that long, sleek cigarette holder with such a sinister grace, wearing that greedy smirk that never leaves her face except when it is replaced by contemptuous anger. Raj, in his innocence, assumes that Maya is a respectable woman, but we know right away she is no such thing. We can see the wheels turning as she schemes to exploit Raj for quick riches. Nadira could tell us all of this with the arch of an eyebrow.

Maya drives the central conflict of Shree 420 with her seductive call to the dark side that separates Raj from Vidya's wisdom and traps him in Maya's illusion. And it is a career-defining turn for Nadira. For the next two decades she appeared in film after film as wicked, bitter, cruel, and angry women. In Pakeezah, Nadira played a madam, Gauharjaan, in whose brothel Sahibjaan (Meena Kumari) resides and works. Here, as in Shree 420, Nadira presses into service her range of knowing smirks, contemptuous sneers, and scheming raised eyebrows to great effect, sitting languidly by Sahibjaan's side as the young tawaif performs. In a heavy-handed but satisfying bit of symbolism, a smitten Nawab sends Sahibjaan a songbird in a gilded cage. Seeing the metaphor through, Sahibjaan releases the songbird from its cage. Later, though, it is Gauharjaan— Nadira— who sternly clips the bird's wings and stuffs it back in. 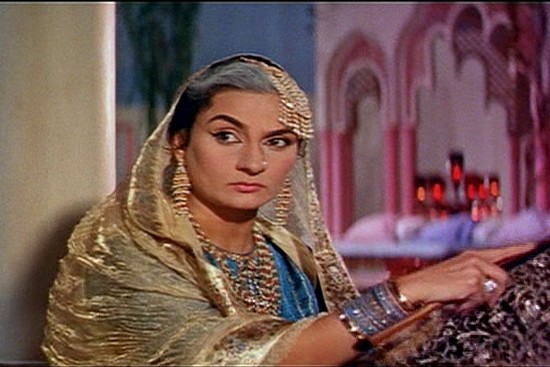 Some films do allow a note of sympathy into the bitterness of Nadira's characters. Dil Apna Aur Preet Parai almost does, constraining her character Kusum in an arranged marriage to an overly humble doctor who is in love with another woman. But Kusum blows whatever sympathetic capital she has when she interferes with her husband's work and hastens a patient's death. Julie, though, frames Nadira's character Margaret's acerbic nature in a broader social context, that of an Anglo-Indian woman who feels rejected and betrayed by Indian society at large. As a result, that character is one of the most layered that Nadira ever played.

In Julie, Margaret has some real love for her daughter that occasionally shines through the bitterly tarnished surface. But in masala movies from Ashanti to Amar Akbar Anthony, Nadira played irredeemably sour older women who exploited fresh young girls rather than in any way nurturing them. She reprised the iron-fisted madam trope in, among others, Hanste Zakhm. There, when the heroine threatens to leave the brothel and build herself a respectable life, Nadira regales her with emotional abuse — where will you go? who else will have you? She then calls in a strong-man to drive her points home with his fists. As he advances on the terrified girl, Nadira closes the door on them, oozing that evil smile.

Even when she is not a courtesan, Nadira's characters often have a hint of sexual liberation, with an overtone of desperation or sleaziness. In Ismail Merchant's Bombay Talkie, Nadira plays Anjana Devi, an aged-out film star who copes with the passing of her glory days by surrounding herself with handsome young men who hope to be stars themselves. ("He's like a bear," she growls of one of them as she lustily rubs his chest. "Shut your buttons before I lose my mind.") The superstar Vikram (Shashi Kapoor) gushes over her with an almost reverential innocence. But what when they are alone tells a different story; she presses herself into his arms, and he peels her off him with something like pity. And yet, when he comes to her lovesick, Anjana Devi offers Vikram practical and detached advice about moving on. Anjana Devi is both horrible and wonderful to watch, train-wreck compelling, sleazy but strong, willful but powerless. 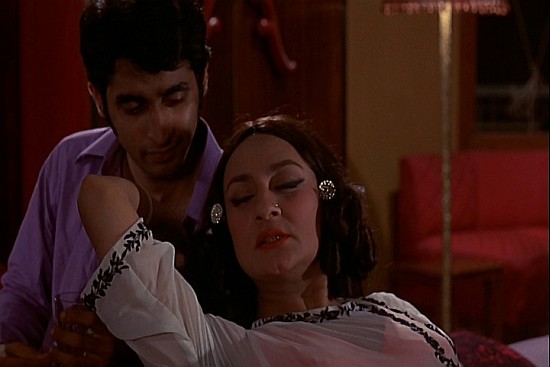 Most of Nadira's characters are like this, not at all likable, yet deliciously captivating. Her characters represent one of the very few paths out of the strict requirements of virtuous womanhood, and also bear the price of that deviation. Their bitterness is the natural result of a long struggle against demure, submissive femininity. Their cruelty comes from a lifetime of being beaten down by the expectations of others. They find power where they can, over whom they can, and exercise it ruthlessly. Those of us who have not completely given ourselves over to the dark side, as Maya urges Raj to do in "Mud mud ke na dekh,”" can't help let a certain amount of awe and envy mix in with our disdain when we watch the characters Nadira played.

Often, the character's deviance from the path of righteous womanhood is of a piece with the movie's theme. It is true in Shree 420, where Maya and all she represents are in sharp opposition to the wholesome values and respectable work ethic represented by Vidya. It is also true of Nadira's breakthrough role, the haughty rajkumari in Mehboob Khan's Aan, a snarling westernized woman who needs the hero to tame and shame her into the Bharatiya Nari mold. The rajkumari is clearly a villain in need of reform, no role model for young women, and yet the first half of the film shows her liberated in ways that contemporaneous mainstream heroines rarely were—free to ridehorseback, to wield pistols and rifles, to just generally be fierce. Like so many of Nadira's memorable characters, the rajkumari is is evil, but she is enviably evil.