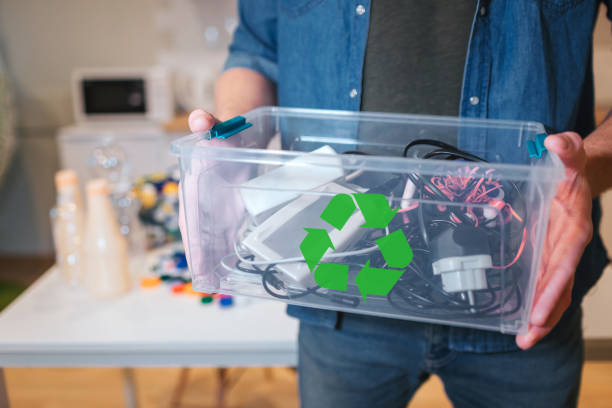 The pandemic-induced work-from-home (WFH) culture and online classes for students is witnessing a big spike in the generation of e-waste in India and could lead to an environmental catastrophe due to their haphazard disposal, experts have warned.

India is the world’s third largest producer of e-waste—electronic garbage such as television sets, computer peripherals, laptops, mobile phones and others—after the US and China.

Experts cite data to say that on an average, each family has now more than 2 laptops and 4 mobile phones. The discarding of such a large amount of e-waste carelessly will impact the environment severely, further contributing to climate change. Though India has a legal framework for handling e-waste since 2011, the rules are frequently violated due to lack of awareness among the people. In India, around 95% of e-waste is still handled by informal sector.

The disposal of e-waste in garbage bins and dumps contributes significantly to climate change as many chemicals are released when they are burned along with other waste. Electronics contain materials like copper, aluminium and iron and when equipment are burnt they accumulate these metals in air.

There are various legislations like Hazardous Wastes (Management and Handling) Amendment Rules, 2003, Guidelines for Environmentally Sound Management of E-waste, 2008 and E-waste (Management and Handling) Rules, 2011 to regulate the disposal and management of e-waste in India. However, their implementation is mostly on papers. A Comptroller and Auditor General (CAG) audit report found that over 75 per cent of state bodies were not implementing these laws.

Pascal Leroy, director general of the WEEE Forum, says, “Many factors play a role in making the electrical and electronics sector resource efficient and circular. But one thing stands out: as long as citizens don’t return their used, broken gear, sell it, or donate it, we will need to continue mining all-new materials causing great environmental damage.” He adds that on October 14, the organisation celebrated International E-Waste Day with focus on making e-products a circular economy.

According to the UN, in 2021 each person on the planet will produce on average 7.6 kg of e-waste, meaning massive 57.4 million tonnes will be generated worldwide. Only 17.4 per cent of this electronic waste containing a mixture of harmful substances and precious materials will be recorded as being properly collected, treated and recycled. This year’s mountain of waste electronic and electrical equipment (WEEE) will total about 57.4 million tonnes—greater than the weight of the Great Wall of China, Earth’s heaviest artificial object.

Ruediger Kuehr, director of the SCYCLE Programme and Head of UNITAR’s Office in Bonn, the value of EEE components in the world’s ‘urban mines’ is enormous. “A tonne of discarded mobile phones is richer in gold than a tonne of gold ore,” Dr. Kuehr points out. “Embedded in 1 million cell phones, for example, are 24 kg of gold, 16,000 kg of copper, 350 kg of silver, and 14 kg of palladium—resources that could be recovered and returned to the production cycle. And if we fail to recycle these materials, new supplies need to be mined, harming the environment.” He adds that the recovery of gold and other material from waste saves carbon dioxide emissions when compared with virgin metal mining.

Notably, corporates in India are also moving to new initiatives to handle their e-waste. IT major Accenture in October 2020, set three industry-leading sustainability goals for themselves globally. These are achieving net-zero emissions, moving to zero waste and planning for water risk by 2025. By 2025, Accenture plans to reuse or recycle 100% of its e-waste, such as computers and servers.

Talking to Outlook, Accenture spokesperson said, “We are making significant strides towards these goals in India…we have already achieved 69% of our waste recycling goals.”

The company is also donating its IT equipment such as desktops to support local communities by supporting access to education. The company has donated thousands of its desktops to NGOs supporting education as part of the “Digital Daan” initiative by Digital Empowerment Foundation (DEF).

The spokesperson said, “The pandemic and consequent school closures have widened the existing digital divide in India. When schools and colleges closed, millions of disadvantaged students in India found themselves with no means to access digital classrooms as only a small section of Indian households possess a computer, laptop or tablet. That’s why, we have been on a mission to enable continuous learning for all through our desktop donation initiative.”

Environmental experts says public awareness and discarding e-waste responsibly by public along with government’s initiative to push for re-cycling of this e-waste could help India arrest the problem before it’s too late.

Indian Resorts And Hotels Are Turning A Green Leaf

World River's Day: A River Is Not The Source Of Water, It Is The Destination