EPL 2018-19: How Liverpool Left Manchester United Trailing In Their Wake?

Premier League leaders Liverpool boast a 16-point lead over their historic rivals at the top of the table just 16 games into the season, with United languishing down in sixth and already eight points off the top four. 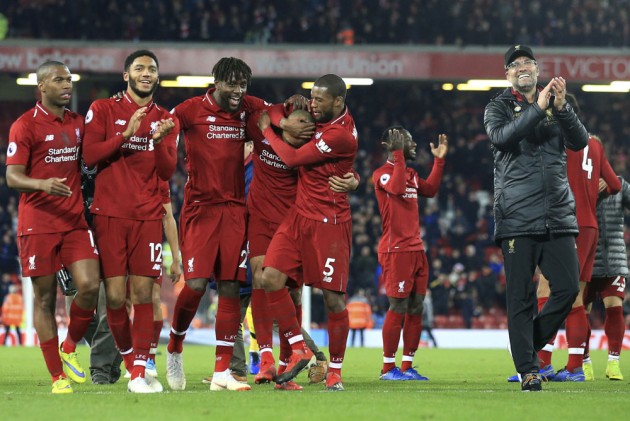 England's two most successful clubs Liverpool and Manchester United head into their first meeting of the season on Sunday at Anfield in a very different form after wildly contrasting campaigns to date.

Premier League leaders Liverpool boast a 16-point lead over their historic rivals at the top of the table just 16 games into the season, with United languishing down in sixth and already eight points off the top four.

Much has changed since the sides last met in March, where a 2-1 victory for United took Jose Mourinho's men five points ahead of Liverpool on their way to securing second-place to runaway winners Manchester City.

Hungry Liverpool Leapfrog Manchester City: What Does It Means For Premier League?

There Is More To Manchester And Liverpool Than Football

Liverpool finished 25 points behind City last season, but now lead the champions by a point thanks to their best ever start to a league season.

Here, we look at how United have been left behind by Liverpool on and off the pitch in recent months.

So often dwarfed by the wealth of City's Abu Dhabi owners and United's vast commercial revenue, Liverpool were this summer's biggest spenders in the transfer market.

The arrivals of goalkeeper Alisson Becker, Fabinho, Naby Keita and Xherdan Shaqiri added extra quality and depth to a squad that made the Champions League final last season and built on the £75 million ($94.5 million) January acquisition of Virgil van Dijk as the world's most expensive defender.

By contrast, United didn't get the central defender Mourinho wanted in the summer and the disparity in both sides' defensive records so far this season speaks volumes.

Only Fulham, Cardiff, Burnley, Huddersfield and Southampton have conceded more than the 26 goals United have shipped, a massive 20 more than Liverpool's water-tight defence.

"I don't see another team getting close to that level of investment, a team that was a finalist in the Champions League, you have to say you are a big candidate. You have to win," Mourinho said of Liverpool's title credentials before the start of the season.

United have still spent significantly more than Liverpool in recent years, but the difference is Liverpool's big investments are paying dividends, while many of United's star signings are struggling to even make it into Mourinho's team.

Alisson's spectacular stoppage-time save from Napoli's Arkadiusz Milik secured Liverpool's place in the last 16 of the Champions League on Tuesday.

Mohamed Salah is back on form and joint top of the Premier League scoring charts, while Van Dijk is a rock at the heart of the defence.

United splashed over £160 million on Paul Pogba and Romelu Lukaku, but both have been benched routinely by Mourinho, while £50 million summer signing Fred didn't even make the squad for their recent 2-2 draw with Arsenal.

The 20-time English champions also spent big in January by handing Alexis Sanchez reportedly the most lucrative contract in Premier League history, but the Chilean, who will miss Sunday's clash through injury, has scored just once this season.

In trying to warn of the threat United sill pose, Klopp arguably offered the most stinging criticism of all on Friday.

"Of course I'm aware of the criticism but when we make the analysis and switch off the sound, it's all quality," said the German.

"There's a lot of quality; there's speed, there's technique, there's physical strength, they have pretty much everything.

"They still have (David) De Gea in goal. It's unbelievable. They have strikers - they can switch between (Marcus) Rashford, Lukaku and others; they have (Jesse) Lingard, they have (Anthony) Martial.

"They have unbelievable quality. We don't judge the points they have, we judge the quality they have, and we prepare for that." While Klopp has squeezed every ounce of potential from his p[layers, Mourinho's failure to get the most from what he has at his disposal has seen United fall behind.