United have failed to finish above City in the league since Alex Ferguson's retirement in 2013, and are already nine points behind the leaders. 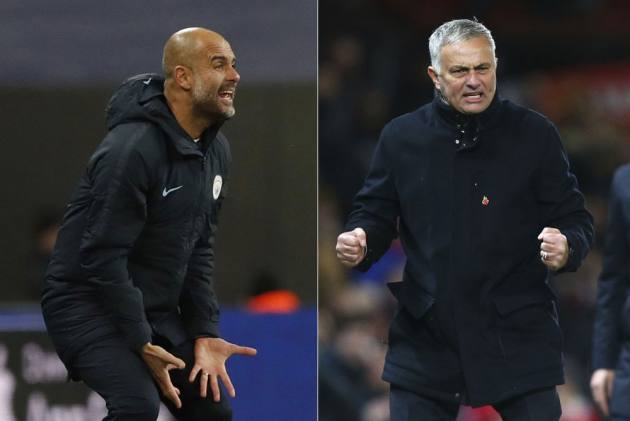 Premier League leaders Manchester City can ensure Manchester United's recent revival is short-lived by opening up a 12-point gap on their local rivals on Sunday.

The champions hold just a two-point lead over Chelsea and Liverpool at the top of the table but have looked relentless in recent weeks and shown no sign of a slip in standards from their record-breaking 100-point Premier League campaign of last season, scoring 12 times in their last two outings alone.

One of precious few blemishes from the last term, though, was blowing the chance to claim the title by beating United at the Etihad as City threw away a 2-0 half-time lead to lose 3-2.

That result only marginally stemmed the tide in the power shift across Manchester towards City since Alex Ferguson's retirement in 2013.

United have failed to finish above City in the league since, and are already nine points behind the leaders.

However, Jose Mourinho's men were also buoyed by their best result of the season by a distance in winning at Juventus in dramatic fashion on Wednesday to back up victories over Everton and Bournemouth.

Defensive concerns remain for Mourinho, though, with United keeping just one clean sheet in their last 10 matches. Stopping a City side averaging four goals a game at the Etihad in the Premier League this season is a monumental task.

United turned to Mourinho as the antidote to their "noisy neighbours" City finally achieving their long-held goal of hiring Guardiola as manager in 2016.

Reunited in England's northwest after two confrontational years on either side of the Barcelona-Real Madrid rivalry, where Mourinho ended Guardiola's three seasons of La Liga dominance, United clearly hoped the feisty Portuguese could again get under the Catalan's skin.

But now in their third seasons in charge, Guardiola and Mourinho's reigns have instead seen a chasm open up with the blue half of Manchester now the dominant side of the city.

Win the Manchester derby on Sunday and City will already be 12 points clear of United just 12 games into the new season, a gap that has gradually widened in each of the past three years.

The season before their arrival, only City's superior goal difference saw them pip United to fourth place in the Premier League and Champions League qualification.

Despite a difficult first season for Guardiola in English football, City finished that campaign nine points ahead of their City rivals.

Last season the gap jumped to a record 19 between first and second place as City romped to the title with 100 points.

"There is a quality of the work, of the organisation, I think that is untouchable," even Mourinho admitted on Friday.

City certainly seem untouchable at the moment. Once again on top of the Premier League, a goal difference of plus 29 to United's plus one tells the story of both sides contrasting fortunes so far this season.

United have at least shown some resilience in recent weeks, coming from behind to beat Newcastle, Bournemouth and most impressively Italian champions Juventus in midweek.

Yet, even then every victory seems a struggle. Only twice have they won by more than one goal all season, to City's 12 multiple-goal victories.

But that includes the last one when United came from 2-0 down to stun the Etihad in a 3-2 victory that robbed City of the extra satisfaction of sealing the title against their rivals.

"The point is can we improve enough to catch them next season?" an optimistic Mourinho said at the time.

Fast forward seven months and Mourinho has turned on his superiors at the club for his failure to match City's progression under Guardiola.

"To go to the Juventus level? Barcelona level? Real Madrid level? Manchester City level? How can you reach this level" he complained after losing the first of United's doubleheader with Juve.

Mourinho's argument is that he has not had the backing Guardiola has in the transfer market, despite United spending more than the Abu Dhabi-backed Premier League champions this summer.

Most of that went on Brazilian midfielder Fred, a player also coveted by City, but who has largely failed to make an impact.

The same can be said for Alexis Sanchez. United beat City to his signature from Arsenal in January to much fanfare at the time.

When legendary United manager Alex Ferguson termed City the "noisy neighbours" over the signing of Carlos Tevez, their spending was cavalier.

Since those deep pockets have been married with Guardiola's coaching, City are getting much more bang for their buck.

"They are a small club with a small mentality. All they can talk about is Manchester United, that's all they've done and they can't get away from it," said Ferguson, angered at Tevez swapping sides of the Manchester divide.

There was a time with Ferguson in charge when City fans went to derbies more in hope than expectation. Guardiola has put the shoe on the other foot.