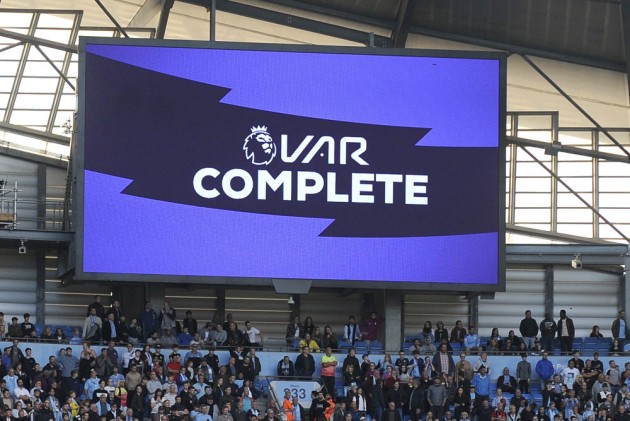 Lucas scored 19 seconds after coming on from the bench to level things up at 2-2, but Gabriel Jesus thought he had settled Saturday's thriller in stoppage time.

In scenes reminiscent of April's Champions League epic, however, City were denied a 16th straight league win when VAR spotted a handball by Aymeric Laporte.

City had hit the front through Raheem Sterling, with Sergio Aguero nudging the home side back ahead after Erik Lamela's equaliser.

And, with Bernardo Silva having hit the crossbar and Danny Rose making a goal-line clearance, City's misery was compounded when Jesus' would-be winner was chalked off.

FULL-TIME | No stoppage time glory for @gabrieljesus33 whose goal is chalked off by the VAR meaning it ends all-square on another drama-packed evening the Etihad.

After City were denied what appeared to be a blatant penalty despite a VAR check when Lamela tangled with Rodri, Spurs fell behind as Sterling headed in from Kevin De Bruyne's exquisite first-time cross.

WATCH: David Luiz Makes A Mockery Of Himself With Clueless Arsenal Debut

But, just like in their Champions League meeting in April when Spurs went through on away goals, City were swiftly pegged back as Lamela capitalised on slack defending to curl in from 20 yards.

Pep Guardiola's relentless side took it in their stride, though, and more De Bruyne magic saw the hosts retake the lead when he supplied another supreme cross, Aguero benefitting this time.

Hugo Lloris reacted sharply to keep out Oleksandr Zinchenko's deflected strike after the restart, before Aguero and Silva passed up great chances.

Lucas showed no such profligacy, powering home a fantastic header with his first touch to make it 2-2.

19 - Lucas Moura's goal came just 19 seconds after he came on as a substitute; as well as this, Tottenham scored with both of their first two shots of this match. Grab. #MCITOTpic.twitter.com/4CDeOtQgMC

The woodwork sparred Lloris' blushes after his error resulted in Silva getting an attempt off, with Rose hooking clear from the line.

Spurs' resistance appeared to have ended when Jesus slammed home following a corner, only for VAR to deny City once again as the ball struck Laporte's arm en route to reaching his team-mate.

What does it mean? VAR haunts City again

History repeated itself on Saturday in the latest meeting between these two.

Four months ago Sterling thought he had sent City into the Champions League semi-finals only for the goal to be ruled out by VAR due to offside. It's fair to say that City supporters will not be the biggest fans of the system.

De Bruyne, who also starred for City in the second leg of the Champions League clash last term, was in inspired form on Saturday, and while his first assist was a thing of beauty, the Belgian's second - for Aguero - displayed his unerring ability to find space where there appeared to be none.

Tottenham did not replace Kieran Trippier in the transfer window, meaning Kyle Walker-Peters has been instilled as first-choice right-back while Serge Aurier remains out of favour.

The youngster had a rough time of it up against Sterling, though, as evidenced when the England forward stole a march on his marker for City's opener, and Spurs' defender never seemed to recover from that mistake.

- Manchester City failed to win a Premier League game for the first time in 16 matches, since losing 2-1 to Newcastle United in January 2019.
- Tottenham are without a win in seven away league games (D1 L6) for the first time since a run of eight matches without a victory ending in April 2012 (D4 L4).
- City mustered 30 shots in the game, the most Tottenham have faced in a Premier League fixture since November 2011 (31 v Fulham).
- Sterling has scored in four consecutive club appearances in all competitions for the first time in his career, netting seven goals in those four games.
- De Bruyne has registered three assists in his two Premier League games this season, one more than he managed in the whole of the last campaign.

A trip to Bournemouth comes next for City, while Tottenham host Newcastle United, who are still without a point under Steve Bruce.