Ever Heard Of Dhoka Dandiya?

The Pravasi Bhartiya Diwas held in Gandhinagar was a disappointing show for the 5,000-odd NRIs who attended. 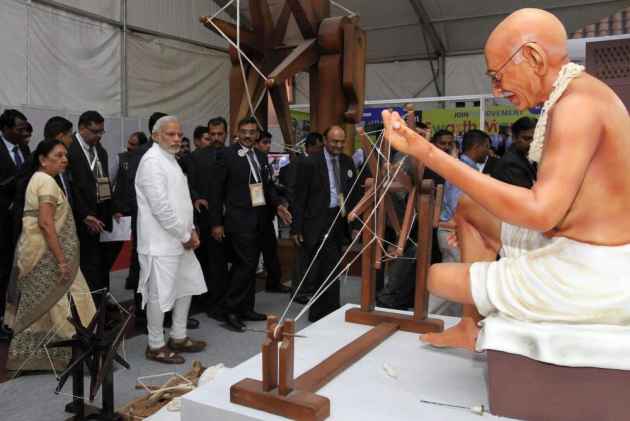 It began with a bang and ended with a whimper. The 13th Pravasi Bhartiya Diwas (PBD) held in Gandhinagar, the state capital of Gujarat, from January 7 to 9 was a disappointing show, marred by glitches and gaffes galore.

The ostensible reason for holding the event in Gandhinagar was to showcase to the Non-Resident Indian (NRI) Prime Minister Narendra Modi's work as chief minister of Gujarat – the plan was to provide a glimpse into what Modi had in mind for the country over the next five years. But at the end of the three-day event, the five thousand-odd NRIs who attended were left wondering what the fuss was all about.

The event was flagged off by Union External Affairs minister Sushma Swaraj and Gujarat chief minister Anandiben Patel. This was followed by an inauguration of the Vibrant Gujarat global trade show the same evening. As soon as the trade show was inaugurated, and the VIPs moved out, the stalls wore a deserted look.

Then, all eyes were set on the second day of the event, when Prime Minister Modi was slated to inaugurate the event. The Mahatma Mandir Convention Centre – designed to hold over 5,000 people – was packed to the brim. But many among this audience were left aghast when Modi chose to speak in Hindi. A 120-strong delegation from Malaysia was heard complaining because they did not understand the speech. This complaint was heard from a large number of other foreign delegates of Indian origin, many of who were second – or even third – generation NRIs who had chosen to attend, drawn by the air of promise after a momentous general election.

The external affairs ministry had not even bothered to make available an English translation or text of Modi's speech for the benefit of the foreigner-Indians. An apparently enraged elderly Indian of Australian origin, upset over the treatment meted out to him, was heard complaining bitterly that he had spent a colossal sum in airfare besides coughing up $200 only to be treated shabbily by his country of birth.

Apparently, Prime Minister Modi himself did not seem too happy either with the walk-through commentary made available during his inaugural visit to the Mahatma Gandhi exhibition. Though he was supposed to use the connecting bridge to walkover to open the exhibition, he could not do so because the bridge was still not ready.

The inauguration of the Pravasi Bhartiya Diwas (PBD) on January 8 was meant to coincide with the return of the greatest NRI, Mahatma Gandhi, to India on this day a hundred years ago. Interestingly, though the entire PBD event was built around the Mahatma's return, no one from his family was in attendance. Rajmohan Gandhi, grandson of the Mahatma who was in Ahmedabad just a day earlier to launch his new book, The prince of Gujarat: The extraordinary story of prince Gopaldas Desai, steered clear of the PBD.

The external affairs ministry spokesperson was at pains to explain that it had invited his other grandson, Gopal Krishna Gandhi, but that he had declined the invitation. Yet, another of Gandhi's grandson, Arun Gandhi, however said that he had received no invitation.

Incidentally, Union minister Uma Bharti – who has been critical of Modi earlier – went overboard in praising him. Speaking at one of the sessions, she said that what Mahatma Gandhi was to the 20th century, Modi is to the 21st century. The way Gandhi championed for change then, Modi is doing now, she said.

The events on the third day presented a repeat scenario. The inaugural address by the Union Home minister Rajnath Singh was in Hindi and most of the chief ministers from the Hindi belt stuck to their mother tongue, creating the same problem for a largely foreign audience.

The irony was that both in Ahmedabad and Gandhinagar there was blinding lighting of roads and public buildings along the entire Sabarmati riverfront. But the two original ashrams of the Mahatma at Kochrab, Paldi, and the Sabarmati ashram remained their austere self. There was no such lighting at either of the two places.

In keeping with this trend, the third and final day's proceedings at the PBD celebrations were disappointing. The session on 'girmitias' (Indian slaves forced to work overseas) hardly had 40 people. In some other such sessions, school and college children were made to sit in the audience as most of the visiting guests had taken off to watch the global trade show.

Finally, a touch of the bizarre – the two 500cc Harley Davidson superbikes purchased by the Ahmedabad police to provide an escort to the prime minister could not be put to use as the policemen were not trained to ride them. All in all, it was a disappointing show.