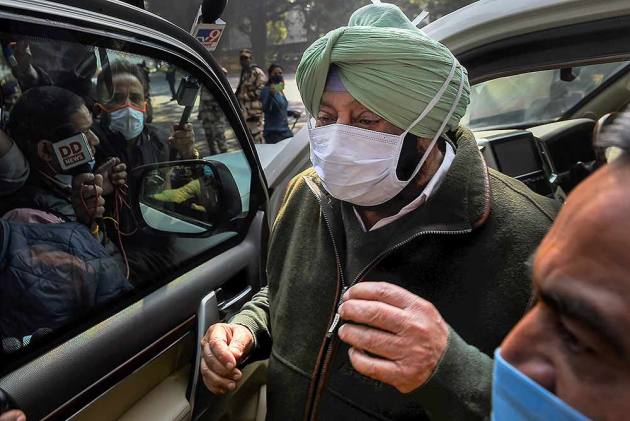 The killings of two unidentified men for their "alleged" sacrilege attempts Amritsar and Kapurthala was condemned by  Ex-Punjab chief minister Amarinder Singh. He called it"absolutely unacceptable".

"Sacrilege is wrong but it is also wrong to kill a person. What is this way? There is a law in this land. If you take him (the accused) to the SGPC office, interrogate him and then kill him. Is this the way? This is illegal and this is absolutely unacceptable," said Singh.

He said the accused should have been handed over to the police and added that no civilised society can and should approve of such killings.

To a question on the issue of people getting angry over denial of justice in the 2015 sacrilege incidents, thus resorting to such killings, the former chief minister said his government had pursued it from day one.

He said first the state had to fight a long legal battle to get the inquiry back from the Central Bureau of Investigation and then the investigation was started and 22 people, including police officials and civilians, were arrested who are on bail now.

There is no justification for mob lynching, whatsoever and it is condemnable, said Singh who faced unceremonious exit from the state government in September amid power tussle with Punjab Congress chief Navjot Sidhu.

Replying to a question on registration of a case against Akali leader Bikram Singh Majithia, Singh said it will not stand the legal scrutiny as the government had not followed due process of law.

Singh asked on what basis the government had registered the case against him since the report on drug trafficking was still lying with the Punjab and Haryana High Court in a sealed cover.

"After all there is a law in the country and I am sure it will not stand the legal scrutiny in the court of law," he said, while adding "just because you do not like someone, you cannot put him behind bars".

Majithia was booked under various sections of the Narcotic Drugs and Psychotropic Substances Act, based on the status report of the anti-drug special task force (STF) chief Harpreet Singh Sidhu on the drug racket and it was filed in 2018 in the Punjab and Haryana High Court.

He said the national security and the welfare of Punjab was on top of his agenda, and hoped that next Punjab Lok Congress and the BJP government will successfully work on that.

On the issue of ticket distribution, Singh said his party and the Bharatiya Janata Party will work together to finalise the winning candidates only.

Earlier, Singh recalled his sentimental association with Rajpura town. He said his father late Maharaja Yadwinder Singh had settled the refugees from Bahawalpur in this town and his mother Late Rajmata Mohinder Kaur used to look after the refugees and he used to visit the camps with her.

Responding to the complaints of harassment, arm twisting, intimidation and registration of false cases at the behest of local MLA, Singh said he will ensure that he (the MLA) is held accountable very soon.

He said his top most priority was national security and good governance in Punjab.

He warned against the designs of the enemy country which was continuously sending in weapons for creating trouble here.

He emphasised the need for close coordination between the Punjab Police and various central security agencies.