The FIR was registered Majithia under the Narcotic Drugs and Psychotropic Substances Act at Mohali on Monday. The SAD dubbed the move as “political vendetta”. 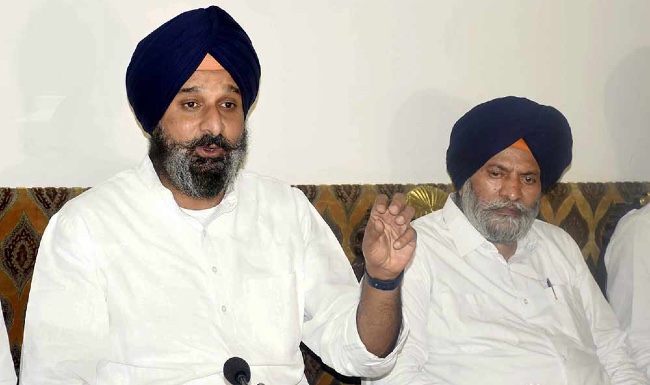 Former Punjab minister and senior Shiromani Akali Dal (SAD) leader has been booked in a drug racket case, provoking the accusation of “political vendetta” from his party.

Talking to reporters in Muktsar, SAD patron Parkash Singh Badal said, “We already knew it.” He said the Congress government changed three state police chiefs to book and arrest the Badals and Majithia.

“Take me wherever you want to, I am ready. Any government which indulges in this vendetta has to face the consequences,” Badal, the five-time Punjab chief minister, said. He said the job of the government is to serve people and not indulge in “political vendetta”.

A few days ago, the SAD had expressed apprehension that Majithia would be implicated in a “false” case.

Punjab Congress chief Navjot Singh Sidhu tweeted, “After 5.5 Years of fight against Corrupt System run by Badal Family & Captain and delay of 4 years without action taken on ED & STF Report against Majithia. Finally now, after pushing for credible officers in positions of power and influence first step has been taken!!”

“An FIR has been registered in Punjab Police Crime Branch against the main culprits of Drug Trade on basis of February 2018 STF report, wherein I demanded this 4 years ago - It is a slap on the face of all those powerful who slept for years on issues at the heart of Punjab's soul,” Sidhu said in a series of tweets.

He said the “fight” against the “drug mafia” will continue.

"Justice will not be served until main culprits behind Drug Mafia are given exemplary punishment, this is merely a first step, Will fight till punishment is given which acts as deterrent for generations. We must choose honest & righteous & shun drug traffickers & their protectors.”

Anti-drugs Special Task Force (STF) chief Harpreet Singh Sidhu had submitted a report in a drug racket case in the Punjab and Haryana High Court in 2018.