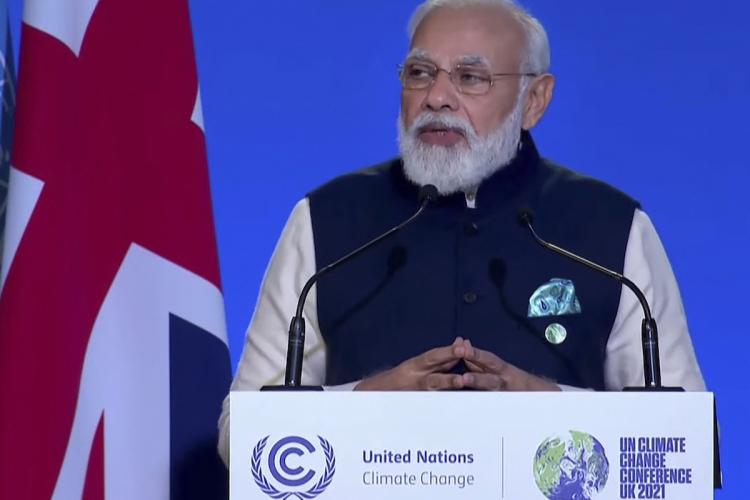 Among the many lofty promises made at the 21st United Nations Climate Change Conference, otherwise known as CoP26 at Glasgow, Scotland, one that caught the attention and eyes of the domestic and international spectators was the pledge made by Prime Minister Narendra Modi to achieve net zero emissions in India by 2070.

This pledge was quick to spark reactions from leaders within as well as outside the country for a developing country was promising such goals when developed countries such as the United States of America and China have pledged to achieve the same target by 2050 and 2060 respectively. In order to understand the importance of such a pledge it is firstly important to understand what net zero emissions mean for a country like India which is still in its growing years.

The promise made by the current prime minister of India, however, caused shock waves for it was the first of its kind to be made by a developing country. Nonetheless, many saw it as one that had been long-coming given the pressure that had been placed on the country prior to the conference, owing to the fact that India is the third-largest carbon emitter.

India, despite the amounting international pressure, had been previously hesitant to give its word on controlling or lowering its energy consumption and emission given its growing needs for the same in the face of its growing population and the many social problems that plague the society- the answers to which lie in increased energy consumption.

The promise to achieve net zero emissions by 2070 is part of India’s five-point plan or ‘Panchamrit’ to join hands with other nations in the effort to move towards a healthier and greener Earth. While the promise is commendable and dreamy in nature, it also brings to light the fact that in order to achieve such a goal, India’s emissions before reaching a stable constant could peak by 2030.

The promise, in the face of this fact, is to rely more on non-fossil fuel energy rather than fossil fuel energy, with the aim being to source 50% of its energy consumption from renewable sources. The real question that therefore, arises is whether India has the funding and infrastructure to support such goals and ideals. While the obvious answer is no, there has been a realisation that post its peak, to reduce its carbon emissions the government will have to move towards enhancing the public sector transport services as well as improve the thermal efficiency of the buildings in cities and towns alike.

Moreover, India has explicitly stated that by taking such a pledge internationally it has shouldered a fair share of the burden that is often placed on developing countries when faced with the problem of climate change and their contributing energy emissions and consumption.

Developed countries have gotten where they are today by consuming a substantial amount of energy which has resulted in considerable emissions that has contributed significantly to the problem of the rise in the global temperature. India by virtue of making such a promise has laid out its expectations vis-a-vis developed countries- to contribute technologically and financially to developing countries.

While these promises may seem utopian in nature, especially given the fact that the conference was attended by 400 world leaders arriving in their own private planes, it does show glimmers of a promise for a better and perhaps maybe even a greener and cleaner future.