If US Loses Important Indian Contracts, The Arms Lobby Will Be Upset And May Endanger Indo-US Relations: Larry Pressler

Larry Pressler, the 75-year Republican politician from South Dakota, popularly known as 'Delhi's man in Washington', on his commitment and mission to the cause of nuclear non-proliferation ... 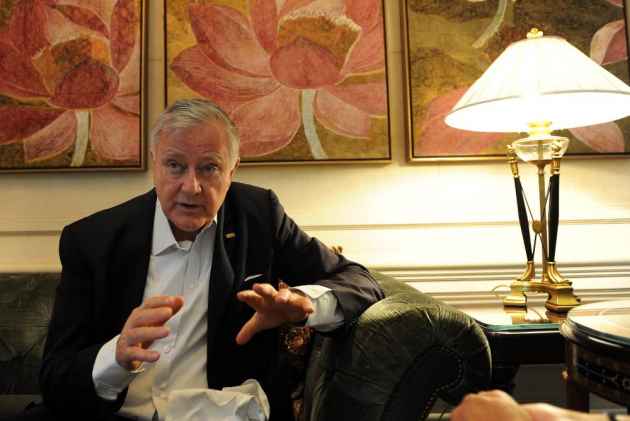 I think we are in a retreat from trying to run the world as we have had so many setbacks and we also have a serious, internal budgetary problem that is bothering a lot of us. I think you will see the US receding in its desires to run the world and I would like to see India expand and increase its activities. So many things are developing in the way the US government now looks at Asia…

How reliable is President Trump?

He changes 180 degrees a lot of things he advocated in his campaign when he comes up to it. He has put a pretty sound administration though. On paper the resume of people he has appointed are pretty good. Some could argue that he has appointed one of the most competent cabinets ever with less political hacks in it and taking a businessman’s approach to it. He seems to delegate very well. On the other hand, he had very tense relations with the Attorney General who was his best friend and that shows he is quite unpredictable. But he may turn out to be a pretty good president contrary to his self-inflicting wounds and tweets.

So he continues to have support in sections in the US?

In the “fly-over” country—that part of the US where I come from and where people have an inferiority complex as they see most flights don’t stop there but head straight for San Francisco-- they like him. That is where you get to see the Trump phenomenon but that is also a step towards isolation and it will affect India and also Pakistan. But the North Korea issue has scared us on the nuclear issue. My mission here is to wake people up to say that probably Pakistan is more dangerous.

Is the focus back on the nuclear issue?

Yes, and part of my mission is to address this growing problem and convince people that we must go with India and have joint exercises or whatever it takes to get the Pakistanis to back down. Reports in Indian media suggest that Pakistan has already started backing down a little. How do you see President Trump’s Afghan policy? It has sparked off a lot of debates and speculations in this part of the world and perhaps, also elsewhere?

I am not in agreement with President Trump’s policy. I am an actual Vietnam veteran, probably, the few you will ever meet. But I am against ‘boots on the ground’ so to speak from the United States point of view. And the reason I am because you cannot send an young man with a rifle, with no training in diplomacy and one who doesn’t speak the language of that country ande expect him to make friends. It doesn’t work. I am not a peacenik or an isolationist but I was against the Iraq war and the Afghan war as we fight it. I think Trump is falling into a trap. He is making sounds of sending more troops to Afghanistan. I think the best thing we could is to depart from Afghanistan.

You have spoken quite candidly about the military-industrial complex and the various lobbying firms and groups that you called the ‘Octopus’ and its power in influencing US foreign policy. How effective are they?

In most countries an ambassador will be able to hire a lobbying firm to push his country’s agenda. But one of the first things that ambassadors serving in the US do is to hire some influential law firms or lobbying firms to gain access to opinion makers. This is the only country where you have to do this and our ‘Octopus’ is perhaps the worst. But on the other hand I would say that we do need the military-industrial state to some extent. But ours has gotten way too strong. So the genius is to find a balance in public administration. But it is very difficult because your public servants or the Congressmen are supposed to make the decisions in the interest of their constituents and the foreign policy.  A lot of this can be improved by involving university things or medicals things or agriculture. But what has happened is that mostly it has been concentrated on arms sale.

So if the US were to lose a few big arms contracts in India will the relations suffer?

Yes, the Octopus will get upset and react.

How will they react?

I am very worried how they might react.  It might not be in the best public interest. We seem to be in a swamp, which President Trump wants to drain and that is how people feel about Washington—this whole money thing. This is what drives good, young people out of politics. It also results in bad public policy or public administration or bad foreign policy. And that could endanger our relation with India. We have to keep the Octopus fed.