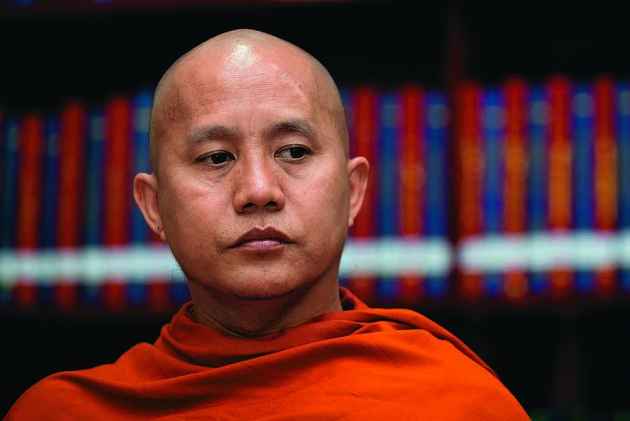 Facebook has confirmed that it has removed the page of a anti-rohingya Myanmar monk once dubbed the "Buddhist Bin Laden" for his incendiary posts about Muslims as the company faces pressure to clamp down on hate speech.

Wirathu, a prominent face of Myanmar's Buddhist ultra-nationalist movement, had amassed hundreds of thousands of followers on the network, using it as a platform to attack Muslims, singling out the stateless Rohingya minority.

Nearly 700,000 Rohingya have fled to Bangladesh since last August following a military crackdown in Rakhine state that has been likened to ethnic cleansing by the US and the UN, but which has been applauded by Myanmar nationalists online.

A Facebook spokesperson told AFP late yesterday that Wirathu's page had been removed.

"Our Community Standards prohibit organisations and people dedicated to promoting hatred and violence against others", a Facebook spokesperson said in an email.

"If a person consistently shares content promoting hate, we may take a range of actions such as temporarily suspending their ability to post and ultimately, removal of their account."

The page was taken down in late January.

Wirathu could not be reached for comment, but he said in a video last year that his account had been temporarily banned for 30 days because "Facebook is occupied by the Muslims."

Facebook use has grown exponentially in Myanmar since a quasi-civilian government opened up the telecoms sector in 2013, making it easier for people to access the internet in the largely Buddhist country.

Hardline monks like Wirathu took to the platform as well, gaining notoriety for fanning anti-Muslim hatred through inflammatory posts.

His tirades have been blamed for stoking sectarian violence, which has plagued Myanmar's transition to democracy.

After Nobel laureate Aung San Suu Kyi came to power in 2016, the government dissolved the Ma Ba Tha group to which Wirathu belonged, and slapped the monk with a one-year speaking ban.

But the man who once appeared on the cover of Time magazine as the "face of Buddhist terror" remains influential.

The social media giant has faced calls to rein in hate speech on its Myanmar accounts for years, with pressure mounting during the Rohingya crisis.

But getting rid of the page will not resolve the problem, he warned.

"They remove his account but not his videos, and his religious hate speeches, they are still on Facebook and his followers are spreading it," he said.