The crescendo for YSR’s son Jagan Mohan Reddy to take charge in Andhra Pradesh is a reminder of the deeply entrenched feudal attitudes in South Asia. 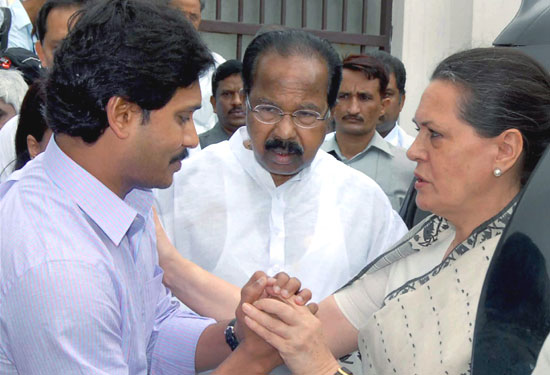 Are we a feudal society passing off as a democracy? True, we conduct the world’s largest election and that is indeed an impressive feat. But look at the manner in which we choose our leaders and clearly we have a distance to go before we can boast of being an evolved democracy. The crescendo for YSR’s son Jagan Mohan Reddy to take charge in Andhra Pradesh is a reminder of the deeply entrenched feudal attitudes in South Asia.

For all the tom-tomming of our great democracy, let’s examine how the grand old party of India, the Congress is now actually structured. A principal dynasty holds the kingdom of Delhi while lieutenants loyal to them manage the provinces. Now if Jagan Mohan does indeed take charge in Andhra Pradesh, lo and behold, we would have witnessed the birth of another mini dynasty.

It reminds me of a history tutorial I wrote while in St Stephen’s college on the Mansabdari system established by the Emperor Akbar. Basically 'mansabs' meant rank and the empire was divided between mansabdars of different rank. They maintained troops and collected revenues. It was the basis for the civil administration and military strength of the Mughal Empire.

The way Indian democracy operates, the nation is indeed divided into little fiefdoms of varying shapes and sizes. From the Abdullahs of Kashmir to the Karunanidhis of Tamil Nadu, regional leaders, caste satraps and socialists are all reborn as dynasts in the great democratic circus we celebrate so much. We have the Patnaiks, Gowdas, the Pawars, the Scindias, the Thackerays... and the list is getting longer and longer.

It is a shocking subversion of the principal of equal opportunity on which political parties should run in a democracy. Even more shocking, no one challenges or even questions this trend. From the Congress that venerates the mother of all political dynasties, the infection has spread to, and is now raging across, the country and most parties are now built around the charisma of a single leader and, increasingly, the family.

Part of the problem lies with the entrenched feudal attitudes of a poor and illiterate population. But the principal of inherited charisma is also propagated from the top in order to keep the spoils of power within a charmed circle. More than the voter I would blame the canny politicians who go and prostate before dynasties. That is, besides the dynasts themselves who close opportunities to others except their offspring.

So instead of changing the status quo, democracy in India has been subverted to uphold family rule.

There are just a handful of political parties in India that are free of this. These include the communists and the Janata Dal (U) led by Sharad Yadav. Socialist ideologue Madhu Limaye had once described political progeny as a “curse” and argued that only individuals without children should occupy high office.

The Bahujan Samaj Party is also apparently untouched by the dynasty disease. But the manner in which Mayawati propagates the cult of the self hardly reflects a democratic spirit. This may be unfair to behenji but I suspect that if she had children to pass on the legacy to, she may not have felt the overpowering need to build parks full of giant elephants.

The impulses that drive our politicians are all terribly bizarre and medieval.

The BJP is off course the largest and most important political party that does not follow the dynastic principle. But its manner of choosing leaders has now been exposed as being even more undemocratic. At least the offspring of political dynasties have to contest elections and face the public. But the RSS men who are now deciding the future of the BJP merely have to attend their morning shakhas and profess a commitment to the mumbo-jumbo they call ideology.

Presumably, Sarsangchalak Mohan Bhagwat will at a time of his choosing deliver a sermon on the mount that shall guide the faithful on their way. At best, it can be described as blatantly undemocratic. At worst, it can be called a sort of voodoo politics.