Shahryar’s passing is a monumental loss to modern Urdu poetry and to the world of Indian literature. 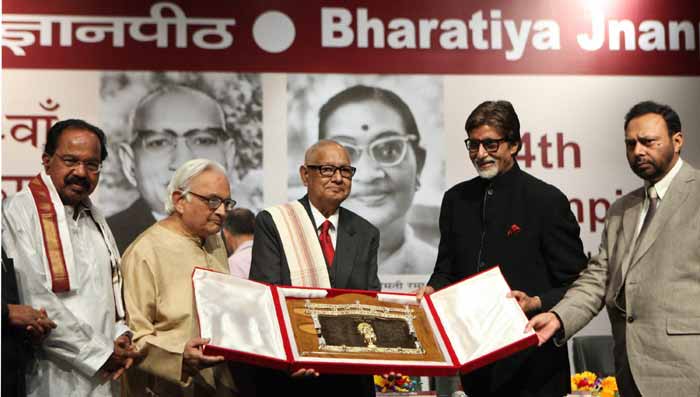 Shahryar’s passing is a monumental loss to modern Urdu poetry and to the world of Indian literature. Although he had been ailing for the past year and had not been writing much for several years, his image as one of Urdu’s most recognizable poet had been consistent. Indeed, the award of a Jnanapith (2008; announced in 2010) had reinforced his stature as Urdu’s pre-eminent contemporary poet.

I was surprised by the perfunctory, half-baked, obituaries in the Indian press that reported his passing. Predictably, the focus of these notices was on his contribution of lyrics to Mumbai cinema; some however did care to mention that he had been the chair of the Urdu Department at Aligarh University (retired 1996) and was the editor of a well-known literary journal She’r-o Hikmat. I am assuming that more serious assessments of his contribution to Urdu letters will follow in Urdu journals, but I am compelled to pause at the moment of his departure and reflect on his special niche in Urdu poetry and the void that has been created by his death. I think it is very important to reach out to a general, educated audience of Urdu lovers that must be craving to learn more about Shahryar at this time.

Shahryar’s greatest contribution to modern Urdu poetry was his felicity in composing ghazals, a style of poetry that demands technical perfection and is packed with emotions at once personal and universal so that it transcends time. Such poetry becomes synchronic with our day to day life. The history of the ghazal, its popularity, then decline, and, the story of its triumphal survival are twined to the history of Urdu itself. The predictable melancholy of the classical ghazal had to be infused with modern themes and moods in order to adapt with the times. Change, chaos, bewilderment -- experiences of modernity’s dilemmas had to become part and parcel of the modern ghazal. Shahryar’s ghazal engaged with change with a piercing directness. Yet his poetic style was so relaxed and effortless that it makes complicated themes appear simple:

[In these moments of separation/departure
Speak the truth; has the world changed you
Or you have changed the world]

The modernist ghazal in the hands of masters like Shahryar acquired awareness, a particularity of the individual’s experiences in a complex world that is mostly unsympathetic. In a bold departure from the beaten path his poems also explored the sensuousness of the experience of love:

Above all, Shahryar was able to access a wide gamut of complex emotional states that form the existence of the individual in the modern world: fear, stress, restlessness, boredom, anger, passion, loyalty, disloyalty, apathy, coldness, love and forgetfulness; the list is awesome. Many of these emotional states were not dissimilar to the themes of the classical ghazal, and reflected a continuity that was important, but Shahryar’s pen crafted new tropes and added new meanings to familiar ones. For example, words such as baarish, maauj, kishtii, daryaa, bhanwar, musaafir (wave, boat, river, whirlpool, traveller, rain) used in the she’r quoted above are often deployed by Shahryar to explore both the sensuous and the ontological meaning of existence.

There is always hope in his poetry surprising us in twists and turns:

[where there was an endless, burning desert
whose miraculous thirst brought water?]

[I had lost you but I felt I had lost nothing
I didn’t sleep for you would be in my dreams.]

Shahryar now will be in the company of his fellow poet-friends with whom he embarked on his poetic journey, Khalil ur Rahman Azmi, Kumar Pashi, Irfan Siddiqi. His closest friend, poet-litterateur Mughni Tabassum to whom he dedicated his last book of poems Shaam Hone Vali Hai (Evening is Upon Us, 2005) died soon after. Shahryar’s ode to Tabassum in Shaam is unsettling in its prophetic mood:

I’m your shadow but how arrogantly I strutted
It’s your love’s strange magical affect
That in Azmi’s death, Najma’s separation
I never had a fleeting thought
That I was now alone.

May I be your shadow as long as I live.
Dear god, grant me
This small, insignificant wish;
this wish that I dare to have

because you are there.]

Perhaps it is fitting to say farewell with his own words: bichhRey logon se mulaaqaat kabhii phir hogi -- we will meet again someplace, somewhere.

[May the world’s interest in my work endure
May a new turn emerge in my story.]