SKM leader,BKU (Rajewal) President Balbir Singh Rajewal told, 'thousands of farmers from Punjab,Haryana, UP and Uttrakhand are arriving at the morcha sites around Delhi with tractors and ration and other supplies.' 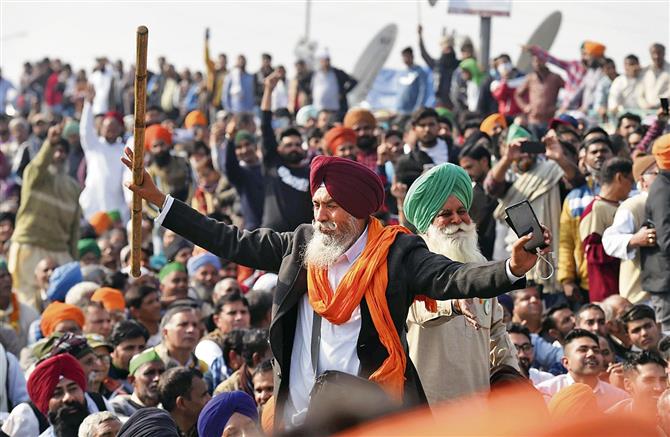 All roads lead to Delhi,farmers across the Punjab and Haryana are geared up to mark the first anniversary of anti-farm laws on November 26 at the Delhi borders. Many have converted their tractor trailers into small rooms with the help of tarpaulins and stocked up woolens and grocery items, and are ready to stay put at the borders if directed by the Samyukt Kisan Morcha (SKM).

“We all are excited to be part of an unprecedented gathering of farmers on November 26. We have been making all arrangements as we did last year before the start of our indefinite agitation against the farm laws,” said Narinder Singh Bhamra, a protesting farmer at Hoshiarpur. Youth are taking care of transportation of protesters in trailers, and many have already reached Delhi, while women are busy collecting ration and other essential items for the mega event.

“Even last November, we did not face any problem during our stay at the border. We had every facility in our trailers. This time also, farmers are making the same preparation. We have all arrangements in place to tackle cold conditions,” said Teja Singh of Samrla,block secretary BKU(Rajewal) There are thousands of farmers from Punjab and Haryana villages on their way to Delhi, from where organisations are expecting a large movement on Friday.

SKM leader,BKU(Rajewal)President Balbir Singh Rajewal told, “ thousands of farmers from Punjab,Haryana,UP and Uttrakhand are arriving at the morcha sites around Delhi with tractors and ration and other supplies”.

Sukhdev Singh Kokri Kalan, General Sectretary BKU Ugrahan(Ekta) is hopeful that the PM would meet their other demands too. “We have set up three committees to make arrangement for food,” said Sukhdev Singh, He said since most farmers had sown wheat by now, they expected a large gathering by November 26. He is expecting that more than two lakhs farmers from across Punjab will gather at Tikri and Singhu border to mark the first anniversary of protest at Delhi border.