Farmers under the banner of the Kisan Mazdoor Sangharsh Committee (KMSC) had started their 'rail roko' stir on December 20 at various places, affecting the movement of several trains and causing inconvenience to passengers. 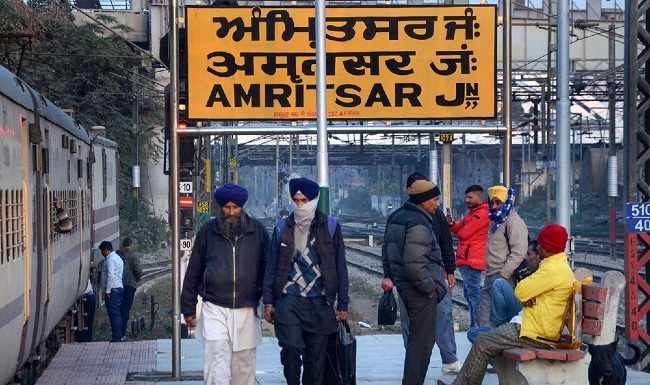 Farmers on Tuesday lifted their blockades on rail tracks at several places in Punjab after representatives of the farm body spearheading the agitation held a meeting with Chief Minister Charanjit Singh Channi here.

The protesting farmers had been demanding a complete farm loan waiver, compensation to the families of those who died during the year-long anti-farm laws stir and withdrawal of criminal cases slapped against them.

After a discussion with the KMSC, Chief Minister Channi decided to extend a relief of Rs 17,000 per acre to the Basmati growers whose crops have been substantially damaged due to hailstorm during the past Kharif season.

The next round of meeting to discuss their demands with the chief minister will be held on January 4, said Pandher. Farmers had been squatting on railway tracks at seven places in Tarn Taran, Amritsar, Hoshiarpur, Fazilka, Moga and Jalandhar Cantonment.

During the discussions with the delegation of the KMSC led by its state president Satnam Singh Pannu on a host of issues, Channi urged them to shun the path of agitation as his government was already responsive to their hardships and concerns.

Channi said the 'rail roko' has already adversely impacted the supply of urea and fertilizer across the state further accentuating their woes during the current Rabi season.

Several issues, including the demand for withdrawal of cases registered against farmers during their agitation, debt waiver, providing jobs and compensation to the families of the farmers who died during the agitation, compensation for crop damage and crop insurance, were deliberated at length, said the statement.

Reiterating his government's solidarity with the victim families of the farm agitation, Channi assured the delegation that the most of the names mentioned in their list of such farmers have already been considered for financial compensation of Rs 5 lakh and a government job to their family members.

Acceding to another demand of the delegation, Channi said to ensure farmers get remunerative price for their produce, the state government would soon come out with a policy for covering under state minimum support price all those crops which are currently not covered under MSP regime of the Centre.