At the Delhi borders, including Singhu, Tikri and Ghazipur, tri-colour marches and programmes will be held throughout the day. 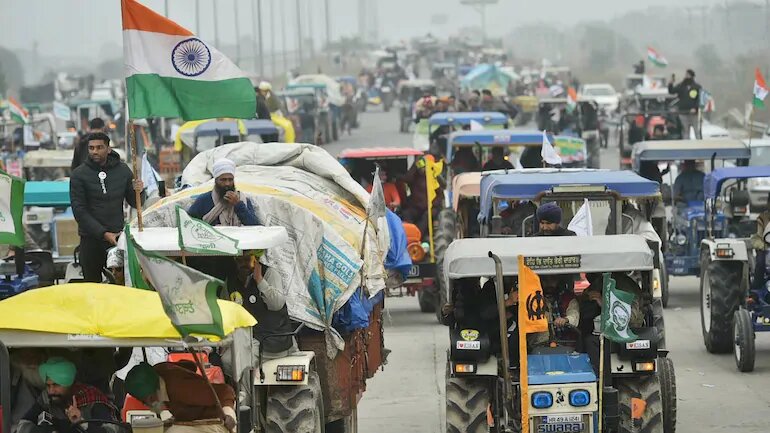 For the first time in  history, the farmers across the country, who are protesting against the three controversial agri laws, will celebrate India’s 75th Independence Day as ‘Kisan Mazdoor Azaadi Sangram Diwas’.

Farmers united by the Samyukt Kisan Morcha's national call,  will mark the day with “tiranga rallies” at block and tehsil levels. However, the farmers are unlikely to enter Delhi.

“On August 15, Samyukt Kisan Morcha has given a call for all constituents to mark the day as Kisan Mazdoor Azaadi Sangram Diwas, with tiranga marches to be organised on that day,” said Kavitha Kuruganti of AIKSCC (All India Kisan Sangharsh Coordination Committee).

“On that day, tractors, motorcycles, cycles, and carts will be taken out in tiranga marches by farmers and workers to block, tehsil, district headquarters or to their nearest kisan morchas or dharnas. These marches will be taken out with the national flag on the vehicles,” he added.

The rallies will be taken out nationwide from 11 am to 1 pm, another farmer leader Abhimanyu Kohar said.

At the Delhi borders too, including Singhu, Tikri and Ghazipur, tri-colour marches and programmes will be held throughout the day.

“At Singhu, farmers will march for about eight kms from the main stage at the protest site till the KMP expressway, with the tricolour, and the flags of their respective farm unions on their vehicles,” farmer leader Jagmohan Singh said.

The tricolour will also be hoisted on the farmer “jhopdis” at these protest sites, he added.

Farmer leaders stressed that the tiranga rally on August 15 will be “peaceful” and will steer clear of Delhi.

“Marches will be taken out across the country, but at tehsil and block levels. They will be peaceful, and we have clarified repeatedly that we have no plans of entering Delhi,” Kohar said.

“The happenings of January 26 put a dent on our movement, so the tiranga marches on August 15 will not enter any city, but our agitation is not going to stop until our demands are met,” added Singh.

Singh said the tiranga marches on Independence Day will reiterate the farmers’ demands of repealing the three contentious laws, and how the government has not extended its support to the farmers despite their over eight-month-long protest.

“Through this rally we want to stress on our demands that we have been fighting for all this time. The speakers at the borders on August 15 will talk about the three laws and why they must be repealed.”

“The rally is also to show how the government is not going on back foot and meeting the farmers’ demands,” Singh said.

Farmers from different parts of the country have been protesting against the three laws since November last year.

While the farmers have expressed apprehension over the laws doing away with the Minimum Support Price system, leaving them at the mercy of big corporations, the government has been projecting the laws as major agricultural reforms. Over 10 rounds of talks have failed to break the deadlock between the two parties.