NC president and MP Farooq Abdullah led the protest in front of the Gandhi Statue in Parliament lawns and also demanded a judicial probe into the recent encounters in Srinagar's Hyderpora and Rambagh, besides Lawaypora in the outskirts of the city in December last year. 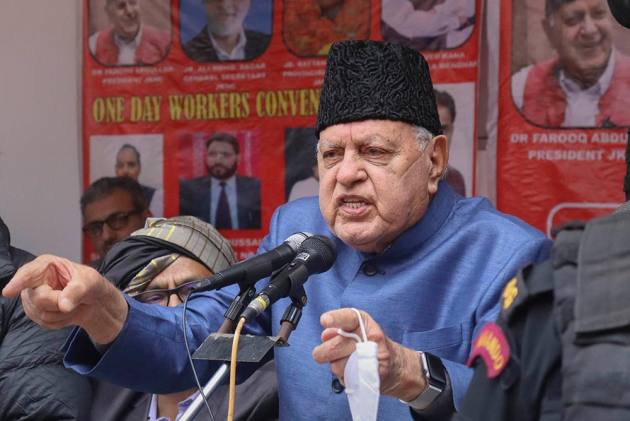 Demanding the restoration of the Jammu &Kashmir's statehood and its special status under Article 370 of the Constitution, Three Lok Sabha members of the National Conference staged a sit-in outside the Parliament

The protest by Abdullah and his colleagues, Akbar Lone and Hassnain Masoodi, on the first day of the Winter Session, coincided with Parliament passing The Farm Laws Repeal Bill, 2021 to rescind the three contentious agricultural laws. The Lok Sabha and the Rajya Sabha approved the bill without any debate amid protests by opposition members who were demanding a discussion on it.

Abdullah was carrying a placard that read "Like farm laws, revoke 5th August 2019 unconstitutional decision and restore Article 370 and 35A", while Lone and Masoodi were carrying posters saying "Order judicial probe into Hyderpora, Rambagh and Lawaypora shootouts".

As per police, four people, including a Pakistani terrorist and his local associate, were killed in an encounter in Hyderpora on November 15. The families of three of the deceased claimed that their slain relatives were innocent civilians, prompting Lt Governor to order a magisterial probe into the incident. On November 25, three local militants were shot dead by police in Rambagh locality of the city, while three more suspected militants were killed in another controversial encounter in Lawaypora area of Srinagar in December last year.

Taking a dig at the BJP, Abdullah said the party just passes bills without discussions which is not a parliamentary way of doing things."The tragedy is that Parliament is no longer what it used to be. Today, the bills are passed without discussion and this is the reason they have to repeal them (farm bills). Had the government listened to the opposition and held a discussion over it, none of this would have happened and over 700 farmers would not have died (during the year-long agitation)," the NC president said.

Abdullah expressed hope that the government learnt lessons from this and it would revoke the decisions taken on August 5, 2019 without any further delay.