The explosion killed a father and his 7-year-old son who were heading to Tamil Nadu's Villupuram district to celebrate Diwali after procuring country-made crackers from Puducherry. 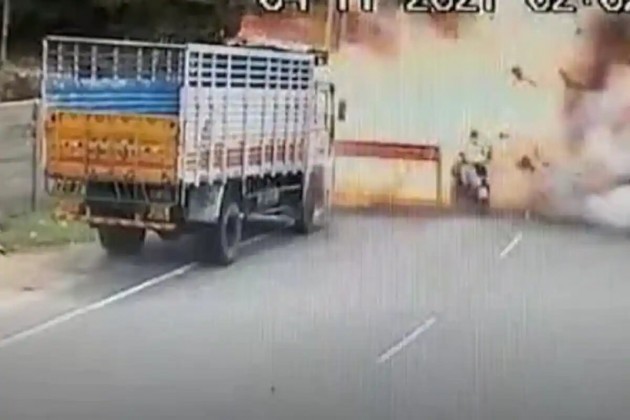 In a tragic incident on the auspicious day of Diwali, a man and his son in Tamil Nadu's Villupuram district were charred to death followed by an explosion of some country-made firecrackers which they were carrying on a two-wheeler.

According to the CCTV footage that has gone viral on social media,  a two-wheeler suddenly bursted into flames right after coming across a police barricade. Another person on a two-wheeler approaching from the wrong side loses control and falls down.

The deceased have been identified as Kalainesan (Father, 35), who worked at an automobile parts company, and his son Pradesh (7).

The father-son duo were were heading to Tamil Nadu's Villupuram district to celebrate Diwali at Kalaninesan's mother-in-law's house after procuring country-made crackers from neighbouring Puducherry.

According to an investigating officer, " The boy was seated on two bundles of firecrackers kept tightly tied in the front of the two-wheeler. We believe that friction and pressure led to the explosion,"

"The sudden appearance of the other two-wheelers from the opposite side could have led to a jerk, causing friction," he later added.

Three other people have also been known to sustain injury, including the person on the two-wheeler coming on the opposite side.

The Villupuram district police have registered a case of culpable homicide not amounting to murder, and rash and negligent driving.