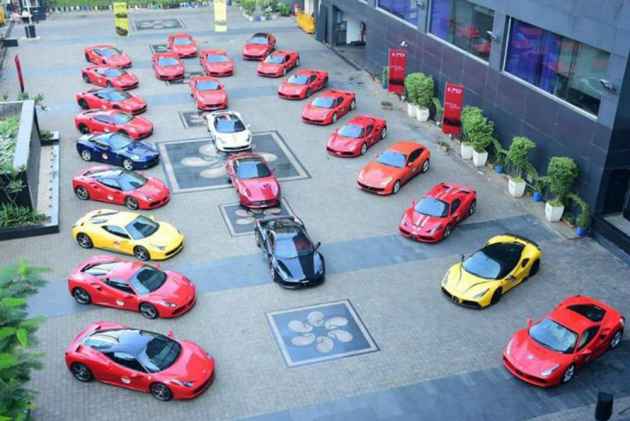 Ferrari - it's a name that makes almost every petrolhead start daydreaming. Some like the classic Ferraris and some like the modern ones, but one thing for sure is that you can't ignore these beautiful creations of metal and science! Spotting one of them on Indian roads is a rare occasion and I recollect each and every moment that I have been lucky enough to spot a Fezza on the streets of Mumbai, such is their charm. So, when my alarm started ringing at 7 AM on a cold Sunday morning, I was buzzing with energy. Why the excitement, you may ask? Well, I was about to witness a gathering of 25 Ferraris on the streets of Mumbai! The legendary Italian brand is celebrating its 70th anniversary and to commemorate this occasion in Mumbai, it organised a special drive for its exclusive clients. It was the largest gathering of Ferraris ever in India and, understandably, it was a spectacular sight. As I made my way to the courtyard of Sofitel in BKC where the cars had assembled, I felt as if time stood still. The sight of 25 sexy and sleek supercars basking under the early morning sun is the stuff of wet dreams for petrolheads and I was smitten! Ferrari F430, 458 Italia, 458 Spider, 488 GTB, California -  my eyes were just going berserk trying to soak it all in. After a few deep breaths I was able to calm the inner child in me before gawking at each of the immaculately maintained examples of automotive art. Understandably, it was a sea of red but there were some brave owners who had got themselves their dream machines in shades of yellow, black, blue and white. Even among these final collection of automotive jewels there were some standout cars, like the only Ferrari F430 Scuderia in the country, which was privately imported by Anil Ambani and apparently was the first RHD Ferrari to be ever made. Pune-based billionaire Yohan Poonawalla's Ferrari 458 Special Aperta (the only one in India) also made its presence felt in the sea of Ferraris. But the car that attracted the most eyeballs without a doubt was Bangalore-based businessman Ranjit Sundaramurthy's yellow Ferrari 488 GTB (nicknamed 488 FXX) with tasty carbon fibre parts, custom wheels and, not to forget, the Capristo aftermarket exhausts that send out a roar that would even scare many carnivores. The only V12-powered car present at the event was Ferrari's four-seat grand tourer, the GTC4Lusso. While the turnout of cars was impressive to say the least, we were personally disappointed that many Ferraris from Mumbai were absent, and we would have liked to see some older beauties like the 308 GTB, F355 and some more V12 cars. The drive was flagged off from the Ferrari dealership in Mumbai and it was great to see hundreds of Mumbaikars turn up for the event. As the convoy made their way, some owners blipped their cars and it was an automotive opera as high-pitched wails bounced off the glass facade of the buildings of BKC. Children, teenagers, older people, men and women all had a big grin pasted on their faces as they saw these magnificent Italian machines tearing the Mumbai tarmac, and this is the kind of joy that only supercars can pull off. The event was held with the support of Mumbai Police and they did a great job of managing traffic at every junction to make sure that the cars could make their way fluidly. The Bandra-Worli Sea Link acted like Monza for the Ferrari owners as they floored their cars, and the melodious note from the V8 and V12 motors was just eargasmic! The pit stop location was Nariman Point so that all the cars can be grouped together for photos, and it was a sight to behold the stunning Ferraris roll swiftly on Marine Drive with the pretty Art Deco apartments in the background. It was a sight I am sure I won’t forget too soon. There were some close calls as overenthusiastic bikers and car drivers came too close to these multi-crore machines but luckily there wasn’t any incident. We can understand the enthusiasm as you don’t see multiple Ferraris rolling together but we will urge fellow motorists to be more cautious in future events. The drive ended at the High Street Phoenix Mall in Lower Parel where the cars were kept on display and understandably they managed to grab a tonne of eyeballs. The first official Ferrari drive was an event we are sure that Mumbaikar Tifosi won’t forget so soon and we are looking forward to more such drives as, like with all good things in life, the greed factor is high when one talks about the sensuous Ferraris!