By knocking Brazil out of the FIBA Basketball World Cup on Monday, the United States also secured their Tokyo 2020 Olympic qualification 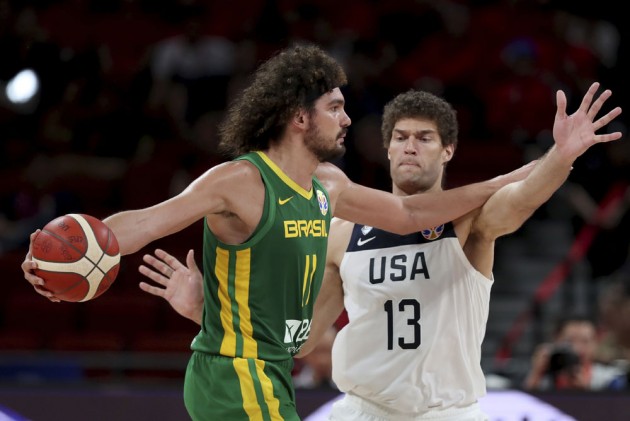 The quarter-final draw for the FIBA World Cup was completed on Monday with the United States to face France in perhaps the pick of the games.

Team USA defeated Brazil to send their opponents crashing out, with Czech Republic instead advancing having held Greece to only a narrow victory earlier in the day.

Australia edged France in Group L to avoid a last-eight meeting with defending champions USA, who will instead face the second-placed side.

Lithuania bowed out with a victory in the same pool, beating Dominican Republic 74-55.

In the classification round, Montenegro, New Zealand, Jordan and Germany achieved wins against Japan, Turkey, Senegal and Canada respectively.

New Zealand and Germany each finished top of their groups.

PAIN FOR GREECE AND GIANNIS

Reigning NBA MVP Giannis Antetokounmpo could not lead Greece to World Cup glory as he fouled out for the second time in the tournament in their 84-77 win over Czech Republic.

Only a 12-point margin of victory would have been enough to keep Greece's hopes of progression alive but they could not hold on after leading 65-53 in the fourth quarter.

Thanasis Antetokounmpo, Giannis' brother and Milwaukee Bucks team-mate, said: "Our first objective was to win, and then to win by 12. We paid for the game against Brazil in the first round.

"But this is basketball. Sometimes you are on top, sometimes you're on the other side."

Czech Republic still had to wait on the final result of the day, where they needed USA to beat Brazil in order to join the American side in the next stage.

Their progression was sealed, dumping Brazil out, as Kemba Walker and Myles Turner starred with 16 points apiece in the United States' 89-73 success.

Walker also supplied five assists and Turner eight rebounds, despite the latter playing just 20 minutes and 41 seconds for Gregg Popovich's side in Shenzhen.

It is Australia who will play Czech Republic next after booking a place on the opposite side of the draw to USA by handing France a narrow defeat.

A final scoreline of 100-98 represented the first time France have ever given up a century of points in a World Cup game, with Evan Fournier's 31 not enough to rescue a result.

This was the first match at the tournament with two players scoring at least 30 points, while Australia became the first to have three on 20 or more.

Patty Mills managed exactly 30, with Joe Ingles on 23 and Aron Baynes – who converted five of his six three-point attempts - on 21.

Team-mate Jock Landale said of Baynes: "He's huge. That's what he does for us. He's a stretched five, who shoots the ball really well. He is going to keep doing it for us and we are going to keep letting him shoot."