Films And The City

Visiting India for real lets the films breathe with a new vivacity, especially those in which a location has so much vibrancy as to be a character in its own right. 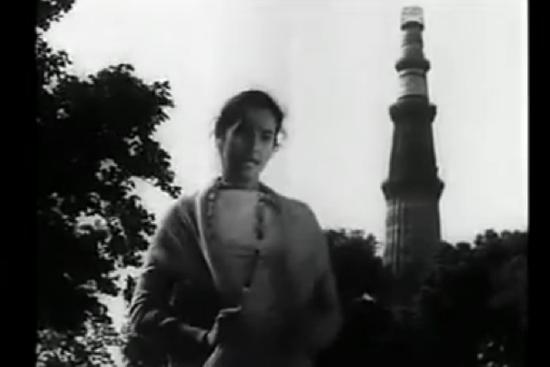 Flying home to the US after my first trip to India, I ached to keep my head and my heart there just a little longer, to stretch the final hours of an adventure that I wasn't ready to end. My body raced westward through the sky, but my mind tarried on Marine Drive. And so I passed the time watching Hindi movies.

One of them was Vijay Anand's Tere Ghar Ke Samne, and its postcard-perfect scenes of Delhi brought me right back to exploring that city on the first days of my trip. As the city’s landmarks—India Gate, Humayun's Tomb—appeared in the frame, I kept thinking, “Hey, I was there!” I didn't get to romp up and down the endless spiralling steps of Qutub Minar like Dev Anand and Nutan did in the movie's fabulous song, “Dil ka bhanwar kare pukar”; by the time I got there, the tower had been closed to visitors for three decades. But I lived vicariously through them, as they cavorted through my favorite of Delhi's sights.

I am especially fond of movies in which a location has so much vibrancy as to be a character in its own right. Rakeysh Omprakash Mehra’s Delhi-6 brings Chandni Chowk to life through the awed eyes of Abhishek Bachchan as a young man who grew up in the US. His sense of wonder at the tumult and diversity of those crowded galiis brings me right back to a bicycle-rickshaw ride and walk I took through those same churning streets during my first visit to Delhi. That was a potent experience that helped India pop off the movie screen and into the rest of my senses, and Delhi-6 captures it perfectly. More than that, Delhi-6 explores the tangled intersections of old and new, traditional and modern, Hindu and Muslim, religious and secular, that infuse that part of Delhi. For that, Delhi-6 is aptly named for its setting, and could not have been set anywhere else.

More recently, Richie Mehta’s lovely independent film Siddharth situates a man’s search for his missing son on Delhi’s streets. Vivid scenes near the New Delhi Rail Station whoosh across the screen. Mehta keeps his camera low, placing the audience right on the ground with the characters. Instead of background music, there is the incessant honk of horns of every pitch, the clatter of bicycles, the sizzle and shout of street-food vendors. It is as evocative as a movie can be, in conveying the experience of being in a place.

I had not yet been to Kolkata the first time I saw Shakti Samanta’s classic noir film Howrah Bridge, nor Sujoy Ghosh’s modern noir Kahaani. But each of those films, in its own way, shows the city as a pulsing, layered entity, an almost active participant in the shady subterfuges that propel their narratives. In Howrah Bridge, the city is an ever-present, ever-shifting backdrop. The movie skulks around the city’s grimy streets, from seedy waterfront shanties to shady nightclubs. Then, as if to defend itself from the picture these dank scenes paint, the city offers us its better side, as Om Prakash drives his tonga down sunlit boulevards in the song “Sunojii yeh Kalkattaa hai,” cheerfully pointing out bright monuments and charming riverside parks.

Kahaani’s Kolkata is as frantic and dense as the rapid cuts and insistent beat of the song it opens with, “Ami shotti bolchi.” The song howls “Kolkata, you sexy!” and it is just right; the Kolkata of Kahaani is sexy, all heat and fluidity and mesmerizing chaos, as Vidya Balan rushes darkly through the cramped workspaces of Kumortuli or sweats down in the metro. By the movie’s end this Kolkata becomes one with the roil of its Durga-worshiping throng, and swallows characters whole. This is not merely a scenic backdrop for a movie, famous landmarks dropped into the scene like celebrity names dropped at a party. This city is a character with a life, an appetite, an autonomy.

On my first visit to Mumbai I stood in front of the gateway to India, flung my arms out like an idiot, and belted “Yeh hai Bambaii nagariaa, tuu dekh babuaa!” But Mumbai is the locus of so many movies that in most, it is more like a mother to them, or like a comforting visit home, than it is a character itself. Still, some movies capture aspects of the city in memorable ways. Basu Chatterjee’s charming Chhoti Si Baat struck me (again, not long after that first trip to India) with its lively street shots and quotidian scenes of young upwardly mobile Bombayites; its characters ride the bus to work, populate busy offices during the day, and congregate in modestly stylish restaurants afterwards.

More recently, and more dramatically, Dhobi Ghat shows the stratifications of Mumbai life, the way its layers slide across each other, sometimes snaring and mixing. A slum-dwelling Prateik Babbar with dreams of joining the movies washes clothes for high-rise occupants like Monica Dogra; she rubs elbows with intellectual elites like Aamir Khan at occasional parties; he discovers in his home artefacts left behind by Kriti Malhotra’s character, a middle-class newlywed with still another entirely different sort of life.

At their best, movies can do this, open windows onto the vast array and complexity of human experiences. For me, as a foreigner in an extended love affair with Hindi films, meeting some of the people who live the real-life lives evoked in such movies, and seeing in person the places where they are lived, has had a startlingly resonant effect on my experience of the films. Watching Hindi movies has made India a fascination for me of limitless depth and life, and visiting India for real lets the films breathe with a new vivacity.