CITU president, A.K. Padmanabhan, on the attitude of the NDA government and why the trade unions called for a nation-wide strike 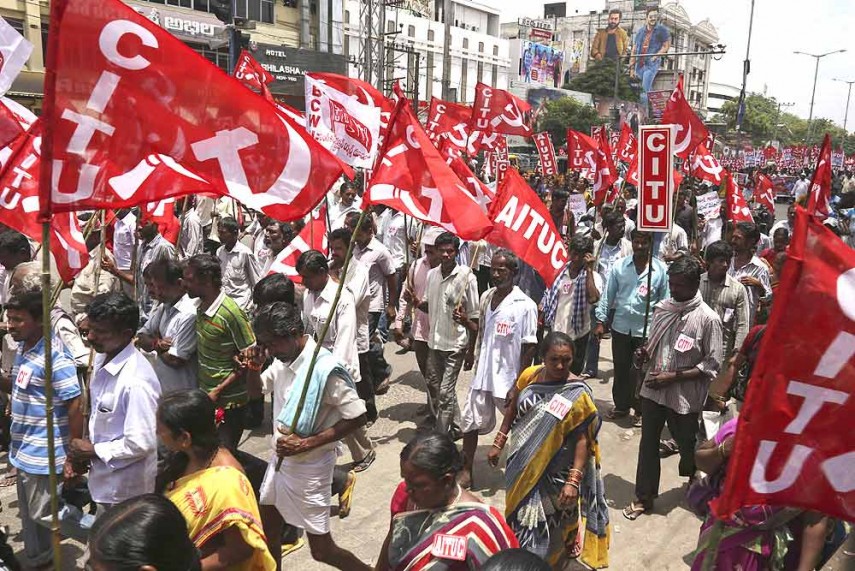 The nation-wide strike on Friday called jointly by 10 of the 11 central trade unions in the country evoked a mixed response. AK Padmanabhan, President of Centre of Indian Trade Unions (CITU), in a conversation with Anoo Bhuyan, accuses the Union Government of driving a wedge between workers by holding talks with only the Bharatiya Mazdoor Sangh, the only central trade union to remain aloof from the workers' strike. Ease of business, he asserts, cannot be allowed at the cost of workers' interests. Excerpts :

The Government claims to have met you half-way by raising minimum wages for unskilled workers in Grade C workers to Rs 9,100 per month whereas the trade unions were demanding Rs 18,000. How would you react ?

The Government claiming credit for raising minimum wages is like the BJP saying they suffered more than other parties during the freedom struggle. Their statement makes no sense. There are two issues here, one being the charter of demands we have submitted, and second is the attitude of the Government towards workers and trade unions. The trade unions have been on a joint platform in this struggle since 1999. INTUC and BMS joined us only later in 2009. We have had 12 country wide strikes in all these years.

Union Labour Minister Bandaru Dattatreya says the NDA Government has done more for labour than the UPA. How do you compare the UPA and NDA's respective approach to workers' issues?

There's not much difference between UPA and NDA. Neither of them wanted to engage with us. The basic attitude of both these Governments was against conceding any of our demands. The interesting change with this government is that now they are treating different trade unions differently. The Finance Minister has said they have been regularly discussing issues with trade unions. But they haven't held discussions with any trade union other than the Bharatiya Mazdoor Sangh. I don't even have appropriate words to use for these kind of comments and the least we can say is that this is a deception.

All trade unions wrote to the NDA Government as soon as they came in, with the charter of demands and called for a discussion. But just like the UPA in 2013, NDA's assurances to us in 2015 were vague and we decided that we would again have to go ahead with the strike.

We already know that the Finance Ministry nurses a contempt for workers. But they have been mandated to hold dialogues with trade unions. Instead, only the poor labour minister Bandaru Dattatreya has invited us for a talk where he basically told us what his ministry had done. But we have so many issues in our charter and yet none of them was addressed. He said the inter- ministerial committee on labour headed by the Finance Minister would call us but so far all the government's talk on tripartite consultations and transparency has been proved to be entirely rhetorical.

Why do you think all trade unions barring the BMS are being ignored by the Government ?

As I said only BMS was invited for talks with the finance ministry. And we have not been called for any discussion. Clearly, only those who listen to this government will be invited to the table. If this is the attitude of this government, that of creating a wedge between workers and unions and confusing workers, then it is in for a difficult period ahead. Remember that BMS is only one of the 11 recognised central trade unions. The 10 of us together constitute a big force.

We have been all been working collectively and trying to talk to the government. BMS too has consistently opposed this government's practices such as on the budget or on FDI. If you see their resolutions, they are in complete disagreement with this government and have criticised it for vacillating. They are protesting against the same things individually while we are doing it collectively. But they refuse to overtly participate in our strikes. Last year, they supported us and then withdrew at the last minute. This year they didn't even participate and instead celebrated the government's paltry proposal to raise minimum wage to Rs 350.

BMS is being used by this Government to confuse workers. They have fallen for it. How can they be critical of this government's policies in their resolutions and at the same time celebrate this small increase in minimum wage as a victory? I don't find any justification for celebrating and not joining our strike.

When you say workers are being confused, are you suggesting that you are going to lose your support base, as more workers will now want to join the BMS as it is able to talk to the government and you are not?

I know of a number of factories where BMS workers have also joined the strike along with us. This is true of this year's strike in which BMS did not participate and also last year when the BMS pulled out of the strike. Workers always understand when unions are being pampered by either the government or by managements. They know the game and their consciousness will not let them support BMS like this.

How do you respond to the timing of the Supreme Court verdict on Singur coming in the same week of your strike? On the one hand the Left has championed land issues and workers' rights, and on the other hand doesn't the verdict cast a shadow on your cause?

The verdict has nothing in common with our strike right now. Yes land issues are important and we support those rights. Left leaders have already commented on the mistakes they made in Singur and the failures of politicians and administration in the Singur case. We have been self-critical.

Recently CITU ridiculed the Make In India initiative. Why are you objecting to a programme that plans to increase jobs which will eventually benefit labour?

Make in India is only a slogan. Yes they are inviting multi nationals to come in but at the same time, the industry that exists in the country is being destroyed. Ease of doing business, is a slogan to attract capital but also to attack trade unions and basic rights of workers. We are for industries and jobs. But they cannot make it attractive at the cost of workers' rights. Government data itself tells us that 1 lakh new job seekers enter the market every month but we are not in the least creating adequate jobs to absorb them.