An FIR against Vadra, Hooda and two companies - DLF and Onkareshwar Properties - has been registered at Kherki Daula police station in Gurgaon. 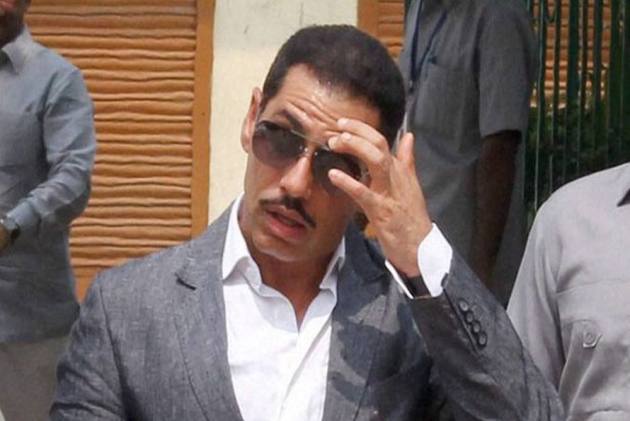 "We received a complaint today from one Surinder Sharma, resident of Nuh, in which he alleged irregularities in the land deals," he said.

In February, Hooda and 33 others were chargesheeted by the CBI in another case of alleged corruption. That chargesheet was related to land deals in Manesar, Naurangpur and Lakhnoula villages of Gurgaon, alleging a scam totaling Rs 1,500 crore.

The Bharatiya Janata Party had made the land deals a major poll issue in 2014, alleging that Vadra benefited through questionable land use permissions granted by the earlier Congress government in the state.

The new FIR said Vadra's company Skylight Hospitality Pvt Ltd purchased 3.5 acre of land in Gurgaon’s Sector 83 from Onkareshwar Properties for Rs 7.50 crore in 2008, when Hooda was the chief minister and also held the portfolio of the Town and County Planning Department.

Later, Skylight Hospitality sold this land to realty major DLF at a price of Rs 58 crore, after procuring a commercial licence for the development of the colony with the influence of Hooda, Sharma alleged.

The company thus made a profit of about Rs 50 crore, according to the allegation which has been trashed in the past by Vadra.

In return, the state government allotted 350 acres of land to DLF at Wazirabad in Gurgaon in violation of rules, Sharma claimed. In the alleged quid pro quo the realty major made Rs 5,000 crore.

The Manohar Lal Khattar-led BJP government had on May 14, 2015 set up a one-man commission to probe the grant of licences by the Department of Town and Country Planning for developing housing and commercial colonies in Gurgaon’s Sector 83.

This included the alleged deals between Skylight Hospitality and DLF.

The Justice SN Dhingra Commission, formed under the Commission of Inquiry Act, had examined the licences given by the then Hooda government for developing real estate in four Guragon villages of Sihi, Shikohpur, Kherki Daula and Sikanderpur Bada.

Vadra and Hooda have now been booked under Sections 420 (cheating), 120 B (criminal conspiracy), 467 (forgery), 468 (forgery for the purpose of cheating), 471 (using as genuine a forged document) of the IPC, and Section 13 of the Prevention of Corruption Act.

The complainant said the payment to Onkareshwar Properties was through a cheque, which was mentioned in registered deed.

Onkareshwar Properties never deposited the cheque, the complainant alleged. It indicated that it was a shell company, Sharma claimed in the FIR.