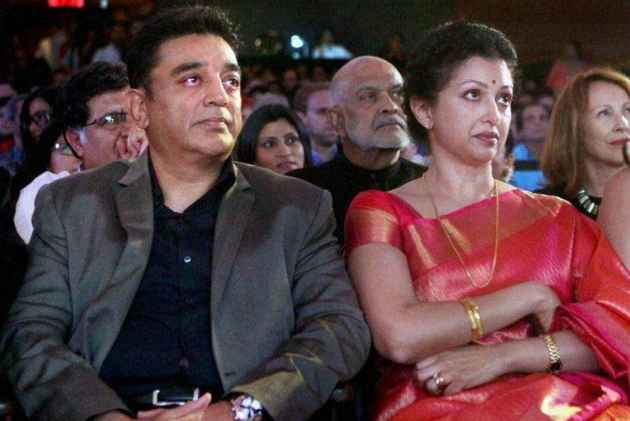 Actor-turned politician Kamal Haasan, has faced his first challenge after launching his political party, Makkal Neeti Maiam, on February 21, from none other than his ex-partner and actor Gautami.

In two recent blogs, Gautami has not only distanced herself from Kamal Haasan “professionally, personally, politically or otherwise”, but has also alleged that the latter’s company owes her salary dues for the work she had done for his films. Her blogs also said that she had “bad and unhappy” things in her life, referring to her life period spent with Haasan, and that she looked for those people in her life who are good, honest, joyful and compassionate human beings, suggesting that Haasan was neither of it.

Gautami, a leading actress of yesteryears in south Indian films, said she was forced to make this statement at this time because of the extent of speculation about her “allegiance & support” to Kamal Haasan and his new political party coming from all sides.

“I have chosen to speak out now because the speculation concerning my association with Mr. Kamal Haasan continues unabated and many people continue to labour under the wrong belief that I support and/or subscribe to his words, actions and decisions. Indeed, a wrong belief that I am a part of Mr. Haasan’s life in any way. I have absolutely nothing to do with him or his actions in any way – professionally, personally, politically or otherwise, she said.

“My single greatest focus during this period has been to establish a stable income to ensure my child’s financial stability. During the nearly thirteen years of our life together, the work that I did as Costume Designer, was only for films produced by Raajkamal Films International, (RKFI), and for films that Mr. Haasan made for other producers. And this was my primary source of income as my working both in front of and behind the camera in other’s projects was actively discouraged. In addition to this, it grieves me greatly to have to say that as of October, 2016, I had salary dues pending right from earlier films like Dasavataram, Vishwaroopam, etc.,” she said.

“As these pending salary dues were the only financial resource at the time for rebuilding my life, I had made repeated efforts to recover the payments from Mr. Haasan and RKFI. I am deeply anguished to say that inspite of repeated entreaties and requests, there is still a significant amount from my due salary pending payment,” she added.

She said she is a single mother, who is fighting to start life again and build a secure future on her own.

Kamal Haasan’s fans and foes in politics and cinema are now keenly waiting to watch how the actor-turned politician will react to this challenge from an unexpected person.