A special strategy to protect the people of Chhattisgarh and to neutralise Maoist activities in the Dantewada region in particular has to be worked out first. It cannot wait till a pan-Indian strategy is finalised. 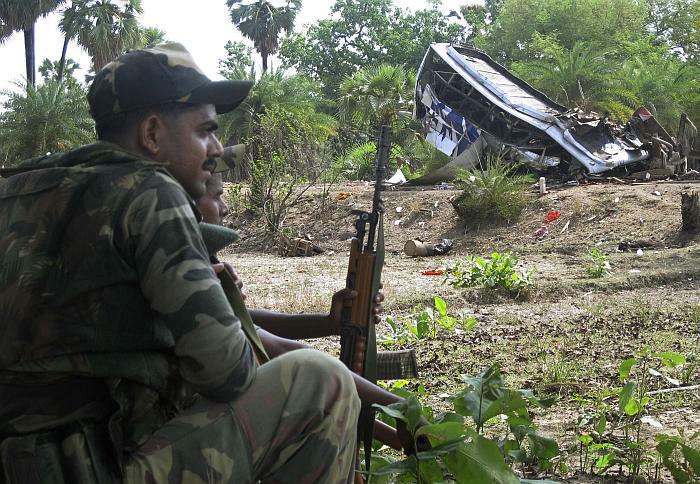 About 30 innocent civilians and 20 other civilians serving as Special Police Officers (SPOs) are reported to have been killed on May 17, 2010, when a group of Maoists (Naxals) blew up a rural public transport bus in the Dantewada District of the Chhattisgarh State. The bus was reportedly blown up with a remote-controlled improvised explosive device (IED) using gelatin sticks. It was going from Sukma to Dantewada.

On April 6, 2010, 75 members of the Central Reserve Police Force (CRPF) and one district police member were killed in a Maoist ambush in the thick forests of Mukrana in Dantewada. On May 8, seven CRPF members were killed when Maoists blew up a bullet-proof vehicle in the Bijapur district. The Maoists also killed six villagers, including a sarpanch (village chief) , near Teregaon in the Rajnandgaon district on May 16 and threw their bodies outside their villages.

These incidents coming in quick succession within a period of six weeks indicate a weak protective security strategy in Chhattisgarh, which needs urgent attention. The ghastly mass casualty attack of May 17 on a public transport bus has revived calls for a selective use of air strikes in the Dantewada area, which has a thick jungle cover. Even if the government authorises limited air strikes, they would not have an immediate impact in the terrain in the Dantewada area, which favours insurgents and poses problems in providing effective protective security to the civilians.

There is a danger that in retaliation for the air strikes the Maoists would step up their attacks on civilians and, if they are successful, it would further damage the credibility of the security forces in the eyes of the public. The immediate step required is the strengthening of protective security measures in Chhattisgarh in general and in the Dantewada area in particular. The state's determination and ability to protect the civilians has to be demonstrated first before we embark on extreme measures such as air strikes. We should avoid over-reaction in panic and rhetoric which distorts our response.

SPOs are not regular police officers on the permanent pay rolls of the state. They are civilians too, who come forward to assist the police, in the performance of certain essential police tasks while continuing in their normal professions. They are given free food when they function as SPOs and a token payment. SPOs are useful in rural areas. They played a useful role in the counter-terrorism operations against the Khalistani terrorists in Punjab. They were often the targets of attack by the terrorists in order to punish villagers who volunteer to assist the police. Immediately after the death of Sukhdev Singh Babbar, the then leader of the Babbar Khalsa, in an encounter with the Punjab Police in August,1992, terrorists of the Babbar Khalsa attacked and killed in their villages not only a number of SPOs, but also their family members.

The targeted attack on the bus carrying about 20 SPOs and other civilians by the Maoists on May 17 was meant to punish the civilians who were helping the police as SPOs and to intimidate the public into not helping the police in any manner. The travel of such a large group of SPOs in a bus carrying civilians was unwise. The Maoists apparently knew this and decided to kill them with an IED even at the risk of killing a number of other civilians, who had nothing to do with the police. It was not an opportunistic planting of an IED after noticing the SPOs in the bus. It was an attack planned in advance after coming to know that such a large number of SPOs would be travelling by this bus.

The incident of April 6 exposed a certain casualness in the counter-insurgency approach of the local security forces and the latest attack on the bus shows disturbingly that this casualness continues unrectified six weeks after the earlier incident.

The Maoists should have known that their attempt to kill the SPOs by blowing a rural public transport bus could result in the deaths of a large number of civilians, who had nothing to do with the police. The fact that despite this they undertook this attack shows that the Maoists, in their strategy, have reached a stage where they are indifferent to the impact of their actions on the general public. They are prepared to face the risk of temporary spells of public aversion in order to achieve their objective of demoralising and discrediting the police. Will this be an isolated attack involving mass civilian fatalities, or is it going to become a trend?

In their attempts to discredit the government of India's counter-insurgency strategy, the Maoists are focussing on Chhattisgarh--Dantewada in particular. While there is a need for a pan-Indian strategy to deal with the Maoists under the leadership and co-ordination of the government of India, a special strategy to protect the people of Chhattisgarh and to neutralise Maoist activities in the Chhattisgarh area has to be worked out based on a larger surge of better equipped, better motivated and better informed security forces to help the local police. The special strategy for Chhattisgarh cannot wait till a pan-Indian strategy is worked out.