Studies done over the last three decades have shown, with empirical data, that meat is bad for human body, Maneka said. 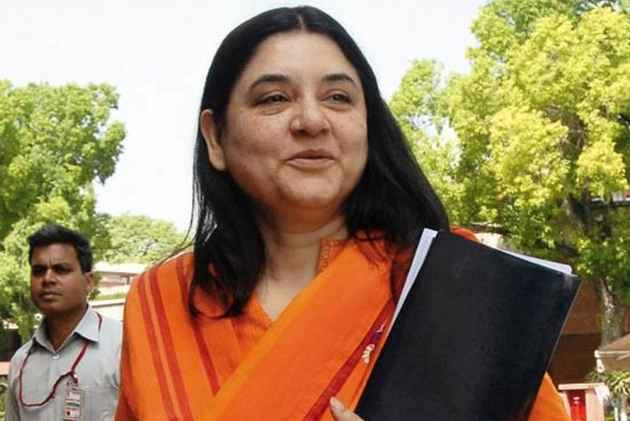 Pitching in favour of vegetarianism, Union Minister Maneka Gandhi on Monday said that all humans are natural vegetarians and meat consumption harms them.

The women and child development minister was speaking at the launch of a film The Evidence-Meat Kills, directed by Mayank Jain, that scientifically explores the effects of meat consumption on human body.

Studies done over the last three decades have shown, with empirical data, that meat is bad for human body, Maneka said.

"Everything about every part and organ of the human body is vegetarian. When we put an alien substance like meat into the human body, we become prone to diseases," she said.

"If you do this on a daily basis," she added, "Your body will weaken. You will not die of eating meat, but it will certainly weaken your body, making it more vulnerable to diseases."

Maneka emphasised, more than once, that the purpose of making or promoting the film was not to persuade people to give up eating meat, but to make them aware of its pros and cons and help make an informed choice.

"All in all, first you eat meat, then meat eats you,” she quipped, during the programme at the Press club.

She said the movie has been made by the doctors so that people make an informed choice.

The Union minister also lamented that dietetics -- the study of diet and its effects on health -- was not given due time or attention during medical education.

"I feel that in the 5-6 years during which they teach you to become a doctor, they teach you dietetics for not more than one or two hours. What I feel is, if you do not teach them about food and their effect on the body, then what is the point of teaching them about the medicines?” she said.

Dr. Ramesh Bijlani, former HoD, Department of Physiology, AIIMS, who features in the film -- along with a few other doctors -- lends a professional voice to Maneka's assertions.

"Use of antibiotics and hormones has become almost routine in not only poultry but also in the meat industry in general, and the types of antibiotics that are used are very often those which are not fit for human consumption. They are not approved for human use but these are given to these animals, but indirectly, the same antibiotics get into human beings when we consume meat," he says at one point during the movie.

The film goes on to examine the health of butchers who are exposed to an overdose of violence in slaughterhouses.

The movie is available, along with other information related to the effects of non-vegetarianism, on www.MeatKills.In.