Fish swam in the ICU of the state run Nalanda Medical College and Hospital (NMCH) in Patna, which was flooded due to incessant rain lashing Patna. 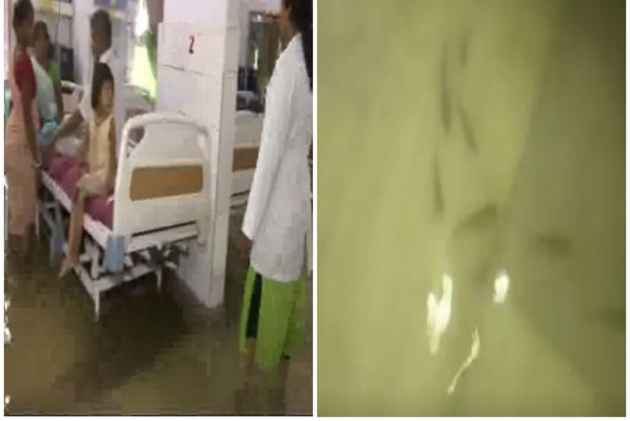 Doctors, nurses and patients had to wade through knee-deep water and fish swam in the ICU of the state run Nalanda Medical College and Hospital (NMCH) in Patna, which was flooded due to incessant rain lashing the capital city on Sunday.

According to hospital officials, water had entered the Intensive Care Unit (ICU) of the medicine department and as a result, patients had to be shifted to a different ICU.

"We have shifted patients admitted in medicine department's ICU to to the surgery department's ICU. Besides, efforts are on to pump out the water," NMCH Superintendent Chandrashekhar said.

As the hospital is located in a low lying area, water has entered its various wards due to the heavy showers, the superintendent added.

While television channels beamed the shocking footage of fish swimming inside the ICU, the family members of patients as well as some of the hospital staffers were left fuming.

"We have come here for treatment of a family member, but if this continues, I am scared that I myself would fall ill," Shyam Kumar said.

One of the nurses at the ICU echoed similar opinion and alleged that along with fish, there were snakes, scorpions and leeches in the water.

"We will also fall ill. You can find everything here -- fishes, snakes, scorpions and leeches," the nurse said.

When PTI contacted Health Minister Mangal Pandey, the person who picked up the phone said Pandey was in Shimla for some party work.

Senior leader of the ruling JD(U) Shyam Rajak said, "The situation is worrisome. Pumps will be used to drain out the water. (It happened as) drains were clogged at some places."