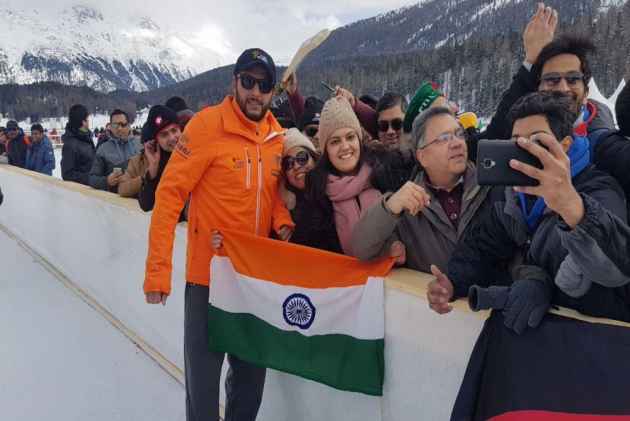 Prevailing cross- border tension may have restricted Indo-Pak bilateral cricketing ties but Shahid Afridi loves to put across a point firmly -- his "cordial relation" with Indian captain Virat Kohli cannot and will not be defined by political situation.
"My relationship with Virat is not dictated by political situation. Virat is a fantastic human being and an ambassador of cricket for his country, just like I am for my country," Afridi told PTI during an interaction on the sidelines of the St Moritz Ice Cricket Tournament.
In the first match of the tournament, swashbuckling Virender Sehwag on Thursday became the first batsman to slam a half-century on ice, in a promotional T20 match on a frozen lake in St. Mortitz, Switzerland, though he ended up on the losing side.
In reply, Afridi-led Royals, with help from former England batsman Owais Shah’s 34-ball 74 not out, coasted home only in 15.2 overs, ending up with 166 for four wickets.
Though Afridi failed to make a mark with his bat, he is winning hearts on social media with his gesture while giving autographs to fans and obliging all selfie-seekers.
The star Pakistani cricketer, while clicking pictures with fans on the sidelines of the Ice cricket event, requested one of them to straighten the flag before they could go ahead and click a picture and this simple gesture won the hearts of several fans from both the countries on social media.

Twitterati were quick to notice the kind gesture and hailed the all-rounder.

Shahid Afridi wants Indian flag to be open while clicking a photo with fans in switzerland. pic.twitter.com/vq88m8htpB

Shahid Afridi wants Indian flag to be open while clicking a photo with fans in switzerland. pic.twitter.com/vq88m8htpB

Shahid Afridi's message to all the pseudo nationalists. pic.twitter.com/N5zbJS4Uci

He autographed the posters, even a Pakistan Tehreek-e- Insaf flag, seemed a tad irritated with multiple one-on-one interview requests, took his wife and youngest daughter out for a walk down the lake and did not even give a second glance at a young Pakistani woman, who in front of everyone shouted "Lala aapse kabhi alag se mil sakti hoon (Can I meet you somewhere else?)."
And yes, he played cricket too and tried to hit out as he would do often during his green jersey days. And the result was more often than not his downfall. It happened the same way but no one cared.
With Shahid Afridi, there are no half measures -- they all love the man more than the player.
(With PTI inputs)