The Chief Minister, referring to his Tuticorin visit on Thursday, said people knew more than officials on the reasons for inundation and requested officials to factor in local wisdom in their proposals to avert flooding. 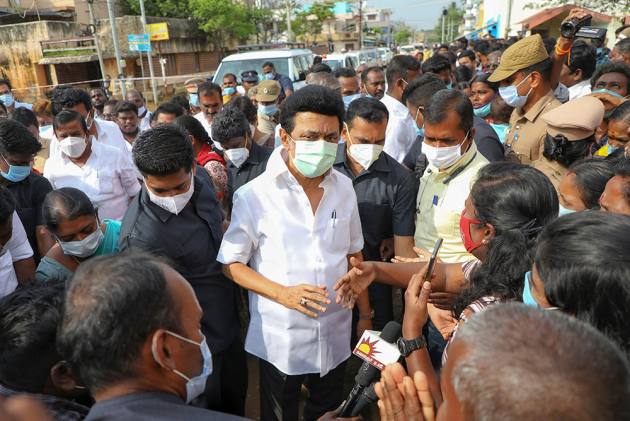 A permanent solution should be found to avoid inundation and damage due to it during rainy season, Chief Minister M K Stalin said on Friday and tasked a committee set up for flood mitigation to expeditiously submit a report on schemes to be implemented to achieve the goal.

The panel should render advice on long term schemes for nearby Tiruvallur, Kancheepuram, Chengelpet and Ranipet districts as well besides Chennai, Stalin said addressing a consultative meeting of the Chennai Metropolitan Area Flood Mitigation and Management Committee held at the Secretariat here.

The Chief Minister, referring to his Tuticorin visit on Thursday, said people knew more than officials on the reasons for inundation and requested officials to factor in local wisdom in their proposals to avert flooding. Without naming the previous AIADMK regime, he said water channels were blocked under the guise of implementation of smart city schemes in Chennai and Tuticorin which led to inundation.

Efforts should be made to avoid a repeat of what happened during the recent heavy rains, Stalin said apparently referring to large-scale inundation. He underscored his government's preparations ahead of the onset of northeast monsoon on October 25 and work taken up by the government amid rains to avoid inundation.

He recalled his inspections in rain battered northern, delta and the southern districts and lauded government officials and employees for their hard work, which he said minimised the damage when compared to previous years. Pointing to damage "in front of our eyes" vis-a-vis rains, he said a "permanent solution should be found" and that is why the government has set up the panel. Detailed schemes should be submitted to the government to tackle rains, however intense it may be, he said.

Chennai and several other nearby regions in the north, delta and southern Kanyakumari districts were badly hit during the recent monsoon rains leading to heavy water logging and submergence of crops. The Tamil Nadu capital and its suburbs witnessed deluge for days together in November which led to closure of subways and traffic diversions as well.

Stalin said besides flood prevention, region and department wise schemes should be formulated for water management as well and in Chennai, area wise consultations and planning is needed to avoid inundation. "All these needs to be done immediately. Formulation of schemes should not take several months. Give the report as soon as possible. We will implement such schemes as quickly as possible. I have the confidence that these can be implemented with your cooperation."

He urged the panel to prepare flood prevention plans and expeditiously submit a 'precise' report encompassing practicable schemes so that the impact of showers seen recently is prevented during the next season. The CM directed all the government departments to render necessary assistance to the committee. Stalin urged everyone to work in cohesion so that entire Tamil Nadu became 'the topper state' in water management.

The panel is headed by V Thiruppugazh, a retired IAS officer (Gujarat cadre) who has served in various capacities. Formerly, he was advisor, National Disaster Management Authority and he has worked under Prime Minister Narendra Modi when he was the Gujarat Chief Minister. State Ministers, Chief Secretary V Irai Anbu, Thiruppugazh and top officials participated.