The 'superclasico' final between Argentina's two most popular teams, already known worldwide for their fierce rivalry, was dubbed the most important club match in the country's history. 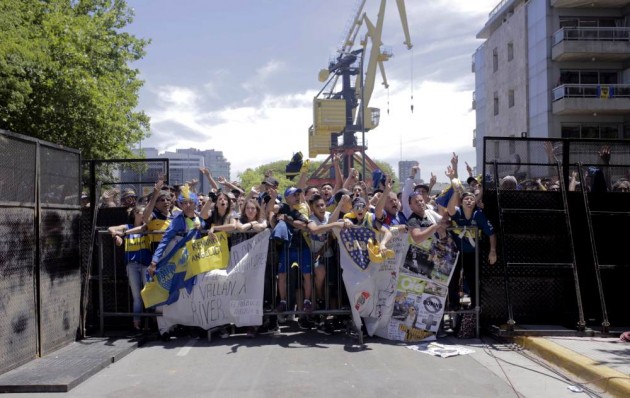 The second leg of the Copa Libertadores final has been postponed for a second time after River Plate fans attacked the Boca Juniors team bus.

Hailed as the final of the finals, the first leg ended in a 2-2 at La Bombonera, the home of Boca Juniors. The second leg was originally scheduled for Saturday at River’s Monumental home, but had been rescheduled for Sunday after Boca team bus was attacked. But, it was once again cancelled, after another attack.

Where and when the match will be played will be decided on Tuesday at a meeting at Asuncion, the capital of Paraguay.

30 People arrested in riots ahead of Copa Libertadores final released

Inside the Boca Juniors team bus after the attack. #SuperFinal#CopaLibertadorespic.twitter.com/MvoBEYqUjg

#CopaLibertadores: Chaotic scenes at and around the stadium. Reports of people stealing tickets of fans that are leaving the stadium. #Boca #Riverpic.twitter.com/AhOL4uN18S

The match between the Buenos Aires arch-rivals was due to be played at 2000 GMT on Sunday after initially being postponed following the attack near River's Monumental stadium, which left Boca players with injuries from shards of broken glass and suffering the effects of smoke inhalation.

"There isn't a level playing field to play the final. That is why Conmebol have taken the decision to postpone the final of the Libertadores and to call a meeting of the presidents of both clubs in Asuncion to find a new date," Conmebol president Alejandro Dominguez said on Sunday.

Boca president Daniel Angelici said he would petition the governing body's autonomous disciplinary commission to punish River, suggesting he may even be hoping his club are awarded victory by default.

"Matches are won and lost on the pitch, that's my personal perspective, but I have a responsibility as club president and that's why I have to stick to the statute," Angelici said at a press conference.

Earlier on Sunday, Boca issued a statement requesting Conmebol not only postpone the match but also apply "the corresponding sanctions provided in Article 18."

Among the sanctions available under the governing body's rules are "disqualification from competitions and exclusion from future competitions".

It includes other options, such as a fine, the deduction of points and being forced to play a game behind closed doors.

Three years ago, Conmebol used Article 18 to punish Boca after their fans attacked River players with pepper spray at half-time of a Copa Libertadores quarter-final tie.

Boca were kicked out of the competition with River progressing.

On Saturday, Boca captain Pablo Perez and midfielder Gonzalo Lamardo required hospital treatment after River fans pelted their team bus with sticks and stones and doused it in pepper spray.

"We've given a shameful image to the world," Dominguez said.

The meeting between Boca president Daniel Angelici and his River counterpart Rodolfo D'Onofrio will take place on Tuesday at Conmebol's headquarters in the Paraguayan capital Asuncion.

But finding a new date to complete the final may be difficult, not least due to the Group of 20 summit in Buenos Aires next weekend to be attended by United States President Donald Trump and his Russian and Chinese counterparts, Vladimir Putin and Xi Jinping, requiring a massive security operation in the Argentine capital.

The Copa Libertadores winners are also due to represent South America at the Club World Cup in the United Arab Emirates from December 12-22.

Saturday's attack initially moved Conmebol to announce that kick-off had been delayed but Boca players emerged from their dressing room to talk to the press and insisted they were in no condition to play.

Images circulating on Argentine television showed players stepping off their team bus rubbing their eyes from the effects of the pepper spray, while others from inside their dressing room showed them being treated for cuts by doctors.

When Perez returned from hospital, he was wearing a large white bandage over his left eye.

"We can't play like this," veteran forward Carlos Tevez told Fox television at the time.

When the kick-off time approached with still no sign of any players coming out to warm up, a deflated feeling seemed to spread among fans inside the ground.

"It's not easy to take this decision when there are 60,000 people in the stadium and the (television) rights have been sold to a ton of countries," Angelici said on Saturday.

As fans left the ground on Saturday scuffles broke out with police leading to several arrests.

Argentina has a problem with football-related violence and more than 300 people have been killed over the last 50 years because of it, according to one charity.

The endemic violence led Argentine authorities in 2013 to ban away fans from all matches in the country.

The 'superclasico' final between Argentina's two most popular teams, already known worldwide for their fierce rivalry, was dubbed the most important club match in the country's history.

It was finely poised at 2-2 following the first leg two weeks ago at Boca's Bombonera stadium.

That too had to be postponed due to a torrential downpour.