Home  »  Website  »  National  » Reportage  »  For The First Time, I Saw Boats Returning With Bodies Not Catch, Says A Fisherman’s Daughter On Cyclone Ockhi And State’s Ineptitude

For The First Time, I Saw Boats Returning With Bodies Not Catch, Says A Fisherman’s Daughter On Cyclone Ockhi And State’s Ineptitude 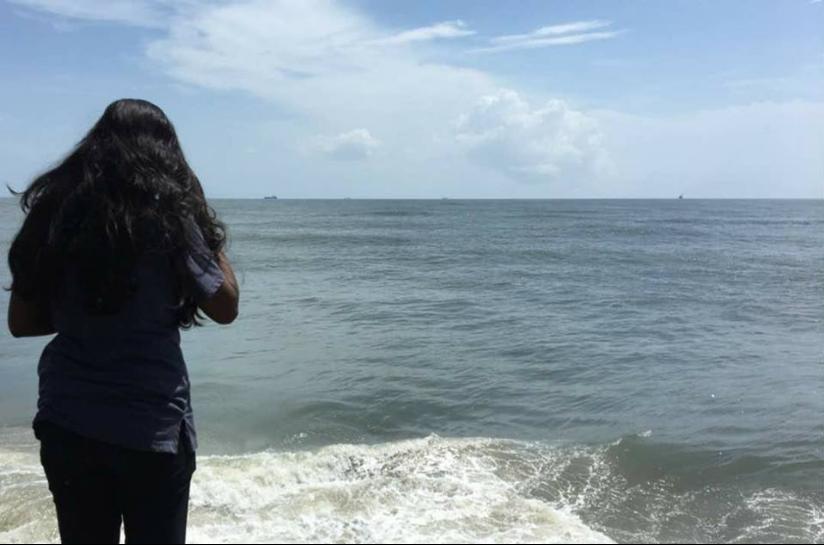 Image posted on Facebook by Sindhu Mariya Nepolean
Thufail PT 2017-12-07T20:04:44+05:30 For The First Time, I Saw Boats Returning With Bodies Not Catch, Says A Fisherman’s Daughter On Cyclone Ockhi And State’s Ineptitude

After taking many lives and devastating India’s southern coast in Kerala and Tamil Nadu, Cyclone Ockhi, which originated as a low pressure area in the Gulf of Thailand, finally dissipated off Gujarat during the early hours of Wednesday. As the hue and cry over the rescue operations is gradually settling down, a Facebook note by a 21-year-old girl from a fisheries community in a coastal village in Kerala has turned out to be a hard-hitting narrative on how everyone involved including the authorities and the general public did their community in.

The Facebook post by Sindhu Mariya Nepolean, daughter of a fisherman from Pulluvila coastal village in Thiruvananthapuram, questions the authority’s delay in giving alert to the fishermen, the flaws in rescue operations, the blame game by political parties, media’s sensationalism and lack of empathy and the ‘selective silence’ of the general public. Since then, Sindhu’s post has gone viral on social media.

Speaking to Outlook on phone, Sindhu explained the situation that pressed her to write this post. Sindhu had reached home for a vacation from her college hostel at 8 am on November 30 when cyclone Ockhi was getting strong in the Arabian Sea. Her father, who had gone to the sea for fishing, had experienced the strong wind just the previous night. “Usually, fishermen would dare the wind and rain if they did not get enough catch for the day. Because, that’s the bread and butter for their families,” she says. Luckily, Sindhu’s father returned home as the battery of his vallam’s (unmechanised boat) light was down and he had got enough catch for the day.

“I was in Poonthura yesterday. Yes, the same Poonthura where Cyclone Okchi took the highest number of lives,” begins her Facebook note in Malayalam posted on December 4. “All I saw there were anxious and anguished faces. Most of the people there were still standing out in open. While walking to the beach, there were tables seen in front of many houses there with white clothes spread over them and framed photos placed upon them. Some of them did not have photos. They only had lit agarbaties. The beach was engulfed by an eerie silence, anxious about those who did not return from the sea even after the fourth day.

Just imagine, you are seeing a boat coming to the coast. The crowd throngs it. Together, they all drag it to the beach. They get a decayed body from it. They carry it to the ambulance. Then the next body comes after an hour. It goes on.

I could understand if it were an electric short circuit, a fire accident, a flood or a landslide that had taken these lives.  But, that’s not the case here. These people have lost their lives due to the irresponsible attitude of certain people. When I think of it, my hand shivers even as I write this.

My papa was also there amongst the ones who set out for the sea that afternoon on Wednesday. Luckily, their boat’s light’s battery was down. That’s the only reason why they returned to the coast (by 3 am) with whatever catch they had got. Had they remained in the sea waiting for the wind to calm down, the man who gave strength for this sea-like girl to dream about life would have become just another victim of Cyclone Ockhi.

I can’t help myself but express my deep anger for the meteorological department and the indifferent people there who could not even give a slight hint to the fishermen about such a disastrous cyclone. It is generally said that they are a useless lot who only give false information. I can now understand that.

It is the lack of coordination in rescue operation that has caused rise in the death toll and the number of missing men. The coast guard team had no knowledge about the sea. It’s not that they couldn’t rescue anyone. But many lives could have been saved had they taken fishermen with local knowledge along with them in rescue operations.

Fishermen don’t see any coast guard in the deep sea. They are often seen patrolling only on the coast. Now, they are being sent to the deep sea for rescue operations. I reiterate, had they taken fishermen with local knowledge along with them in the first stage itself, we could have kept the death toll in one digit rather than allowing it to cross double digit.

The local fishermen who brought one of the dead bodies to the coast at around 8 O’Clock in the night said that the body was not decayed and it could have lost life just two hours before they got it.  Do you realize, at least by now, how crucial each moment was?

I realize that this calamity has not affected anyone other than a large number of fishermen. Like a friend said yesterday, had it been in Sabarimala or any other such places, the state and the centre would have flown their helicopters every minute. I know I am getting emotional. But, I can’t stop the words coming out from me.

If Ockhi had left the sea and decided to roam around the land area, it would have devastated both Thiruvananthapuram and Kanyakumari districts. It means, since it has only passed through the sea, and since only a large number of fisheries families are orphaned by it, you can now keep your selective silence over it. Or, you can observe a one-minute silence and start talking about the next fascist attack.

That is the reason why we are joining our hands together and coming out to tell our stories when your attention is stuck on incidents such as (Minister) Kadakampalli’s helicopter ride, the blocking of (Chief Minister) Pinarayi Vijayan’s car (by angry fishermen), ( Defence Minister) Nirmala Sitaraman’s visit to Kanyakumari etc.

Now I realize why someone from our own community must be there to tell the stories of the fishermen on the coastal areas.

The sea is getting calm now. But, our minds are still turbulent thinking about the ones who are still missing. The dead bodies recovered have to be recognised and should be handed over to their families. Many whom I know closely have lost their dear ones- either dead or missing. I don’t know how I can console them.

Yesterday, for a moment when I lost my mental control, I felt I should ask papa not to go to the sea again. I thought I should ask him to leave this job which is so uncertain and to tell him that it is so unbearable to look at the sea and wait for a dear one. But, then I realized it is part of our life. This uncertainty! Within some days, everything will be normal again. Our fathers and grandfathers will go to the sea again not wanting to remember any of this. Because, we are fishermen,” concludes Sindhu.