For The Love Of A Feckless Goofball

Again and again, Kishore's humble, simple-minded, loony characters win over women who are way out of his league by any societal measure. 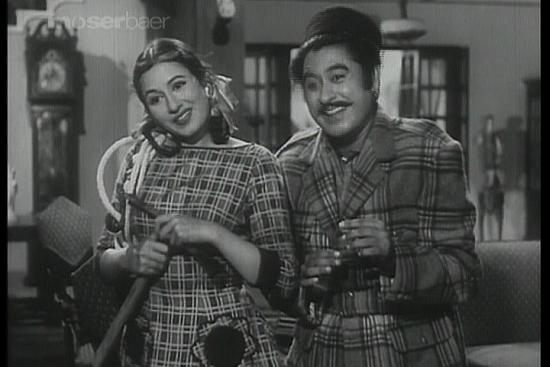 There is a beautiful moment of surrender in the utterly wonderful Chalti Ka Naam Gaadi, during the song “Ek Ladki Bheegi Bhaagi Si”.  Madhubala's character has brought her malfunctioning car into a garage in the middle of a rainy night. She has awakened the sleeping mechanic – Kishore Kumar – and the two have quarreled.  But Kishore is a gentle soul, and as he eyes Madhubala, soaking wet and boiling mad, he hatches a plan to cheer her. He begins to sing as he works on her car, prancing playfully around the garage, malleting out melodies on engine parts. Madhubala sniffs and harrumphs, almost willing herself to stay angry, but by the end of that song Kishore's antics have worked their charm. The magical moment comes when Madhubala, watching through the windows of her car as Kishore skips up and down the stairs, smiles in spite of herself.

Kishore Kumar's romantic comedies are full of such moments, in which the heroine succumbs to his wacky inanity. There is an irresistible something about this silly, unselfconscious man, and the heroines of his movies know it, though they are so often competent, classy, even educated women. In Dilli Ka Thug, Nutan plays a young woman who is a champion swimmer, a medical doctor, and the owner of a controlling interest in a pharmaceutical company. The intellectual superiority of Nutan's character over Kishore's is made amply clear as she spars with him, plays tricks on him, and generally runs rings around him. And yet even this poised, smart, professional eventually falls for Kishore's zany charm. 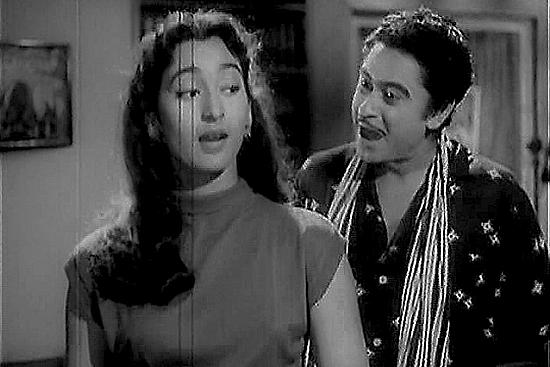 That moment – when Nutan's character knows Kishore is winning her over – comes when he has disguised himself as a driver to be near her. Nutan sees through the disguise, yanking off his fake beard in a huff. But before she storms off, she allows a tiny, delighted, delicious smile. The adorable song "Hum To Mohabbat Karega" follows, and as Kishore chases her across the countryside, Nutan gradually melts to his undeniable sweetness. By the end of the song, he splashes around in the sea while she laughs delightedly at his antics. Pyaar ho gaya hai! Later in the movie, in the leadup to the song "C.A.T. Cat", Nutan's character continues to assert her intellectual and social superiority, chastising Kishore for his ignorance of basic English. Hence the song, in which she teaches him pointedly chosen fundamentals – "M.A.D. Mad, mad maane paagal, B.O.Y. Boy, boy maane ladka" – and by the end, their bond is cemented. The romance, distributed across the entire movie, is a delightful extension of the moment of surrender to Kishore Kuteness.

Again and again, Kishore's humble, simple-minded, loony characters win over women who are, like Nutan in Dilli Ka Thug, way out of his league by any societal measure.  Madhubala's character in Chalti Ka Naam Gaadi is a famous and respected singer; she drives an elegant car and lives a successful, independent life. Madhubala's character in Half Ticket is also a performer, whose work apparently supports her gadabout uncle and marriage-obsessed aunt. Yet notwithstanding her poise and competence, this character loses her heart to Kishore Kumar in perhaps his most ridiculous avatar, a grown man pretending to be a little boy (or pretending to be a mentally ill man who thinks he is a little boy – the film is not precise about such particulars).

In Jhumroo, the gulf between Madhubala and Kishore is even wider than in Half Ticket or Chalti Ka Naam Gaadi.  Kishore is a kooky, humble gypsy who dwells in a village at the foot of a mountain, while Madhubala, who has earned an MA degree, is the daughter of a pompous wealthy man and lives in a mansion atop that very same mountain. Kishore's character, who fancies himself a Sherpa anyway, must literally climb a Himalayan peak to unite with her. The great distance that separates them in education and class is thus expressed both explicitly and symbolically. But differences be damned, Madhubala falls for him, once again taken with that irresistible manic silliness. Madhubala's "that moment" begins with a fun reversal of an ever-so-familiar filmi trope: before the two meet, Madhubala's character is drawn by the sound of Kishore's singing as it wafts along in an evening breeze, like Dilip Kumar in Madhumati. But it isn't the haunting trill of Lata Mangeshkar that hooks Madhhubala here – it's Kishore's trademark yodeling! And when they finally meet, she laughs heartily at his every goofy move and the nonsense he rattles off at speed.  For his part, Kishore is impressed by her use of English expressions, highlighting once again the different strata occupied by the educated heiress and the nutty gypsy boy. 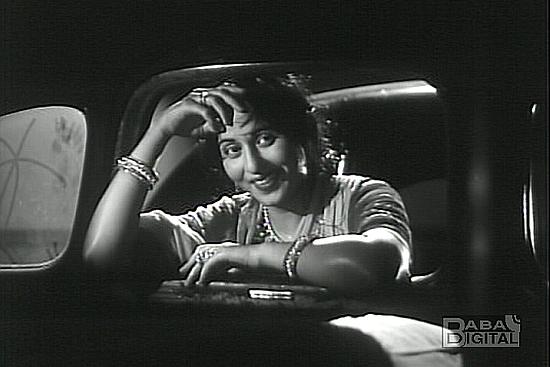 So what are we to make of these heroines of Kishore Kumar's romantic comedies, these poised, talented, smart women who pair up apparently so far beneath their station? The movies carry the clear message that class and education are not the full measure of a person's quality; they celebrate the strengths of the humble everyman. But more than that, there is nothing unfeminist in these romances. To the contrary, these women, these doctors and degree-holders, these English-speakers and performers and heiresses, are secure and confident enough in their careers, their intellects, their social standing that they are able to love a ridiculous man for the way he makes them smile, not for the home he can give them or the circles he can present them in. There is no loss of agency implied, no sign in any of these films that the women sacrifice standing or autonomy for the sake of their love. We have every reason to believe that Nutan's character will go right on practicing medicine after the curtain closes on Dilli Ka Thug, that Madhubala's characters in Chalti Ka Naam Gaadi and Half Ticket will not retire from the limelight. These women are competent to take care of themselves. And this grants them the freedom to choose a feckless goofball of a husband if they want to, because they do not need to rely on a husband for anything other than love and happiness. That is a valuable freedom, indeed.