Women in the menstruating age group are restricted from offering prayers at Sabarimala because the presiding deity, Lord Ayyappa is considered to be a 'naishtika brahmachari' (perennial celibate). 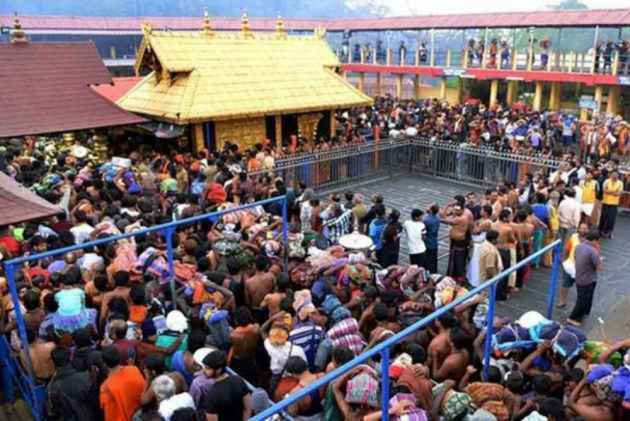 An authentic age proof document is now a must for women visiting the famed Lord Ayyappa Temple in Sabarimala in Kerala, where the entry of female devotees in the age group of 10-50 is banned.

The Travancore Devaswom Board (TDB), which manages the shrine, has decided to make the age proof mandatory during the ongoing pilgrim season in view of the increasing instances of women devotees trying to trek to the hillock shrine defying the restrictions.

The final leg of the three-month-long annual pilgrim season will end on January 14, with the Makaravilakku festival.

Women in the menstruating age group are restricted from offering prayers at Sabarimala because the presiding deity, Lord Ayyappa is considered to be a 'naishtika brahmachari' (perennial celibate).

TDB President A Padmakumar said any authentic document or certificate including Aadhaar card is acceptable during the routine checks at the foothills of Sabarimala temple.

"The decision was taken in view of a number of women belonging to the banned age group trying to visit the shrine recently," he told PTI today.

"Carrying an authentic age proof document will help avoid unnecessary arguments between women pilgrims and the police and Devaswom officials who carry out checks," he said.

Justifying the decision, Padmakumar said a girl from neighbouring Tamil Nadu had tried to visit the shrine along with her father and other relatives recently.

"Those who carry out checks had expressed doubts about her age. Though her father argued that she did not belong to the banned age group, the security personnel did not allow her," he said.

"Finally, the ID card was produced, which said she was 11 years of age...We cannot compromise with the traditions of the shrine," he added.

Women police personnel and the female staff of TDB jointly carry out checks at Pampa, the foothills from where the devotees begin their trek to the hillock shrine.

Padmakumar also recalled that at least 260 women in the banned 10-50 age group were stopped at Pamba during this year's pilgrimage season, which began on November 15 last.

Many of them would have come due to ignorance with regard to the restrictions, he said.

"It seemed that a large number of women were from Telangana, Tamil Nadu and Karnataka.. There were some from Kerala also," he added.

A petition challenging the temple's custom restricting entry of women in the age group of 10-50 is pending before the constitutional bench of the Supreme Court.