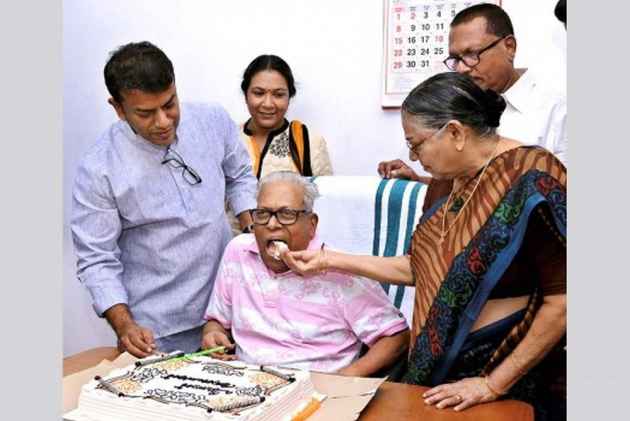 A former aide of Kerala chief minister V.S Achuthanandan has urged the Communist veteran to shed his ‘white elephant’ post and follow the example set by his comrade from Tripura, Manik Sarkar, who leads a humble life.

K.M Shajahan, Achuthanandan’s former additional private secretary from 2001 to 2006 during his term as the Opposition leader and later as the chief minister, has written an open letter questioning the leader’s life expenses incurred from the government.

Shajahan called Achuthanandan’s attention to Manik Sarkar, who moved to the party office along with his wife after demitting from the office. He also cited similar examples set by another ex-CM of Tripura, Nripen Chakraborty and former West Bengal chief minister Budhadeb Bhattacharjee.

“The news about you incurring Rs 12.5 lakh from the government in the last one-and-a-half years for your salary, flight ticket, medical expenses, TA etc has come at a time when media reported about Manik Sarkar and about Bhattacharjee, who lives in a rented flat”, wrote Shajahan, adding, "Chakraborty had carried only an iron trunk with him after ruling Tripura for decades."

He alleged that Achuthanandan’s post as the chairman of the Administrative Reforms Commission was created only for the sake of his continuance in power at his old age. He called this Commission a white elephant and said the Commission had incurred Rs. 2.5 crore from the state.

He questioned Achuthanandan for holding on to the Commission despite having a handsome salary as an MLA. "Why do you need this post and the government bungalow allotted for this post when both your children have two houses each in the state capital?" he asked.

“It shows that you are unwilling to set an example or to lead a humble life,” said Shajahan.